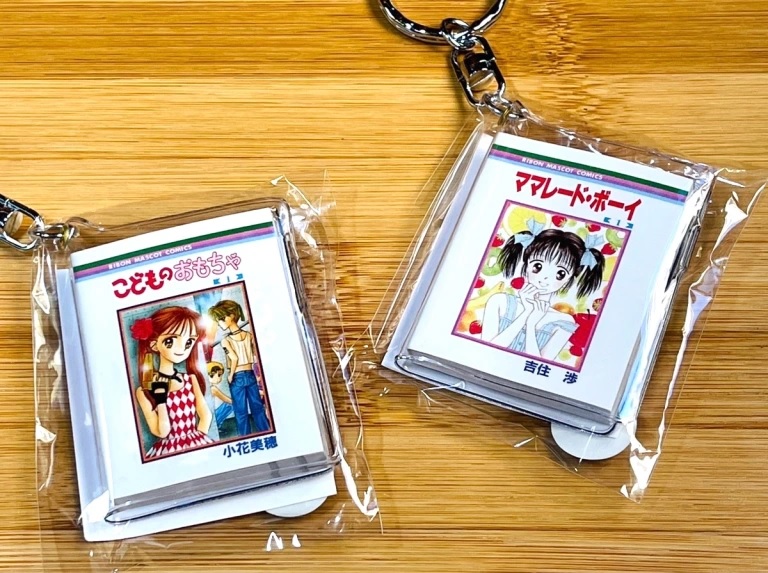 As much as she’s enjoying adult life, our reporter and child of the 1990s Saya Togashi can’t help but feel a wave of nostalgia when she thinks back to the shojo manga of her youth. Those bittersweet stories of young love attached themselves to her heart…and now they’re attaching themselves to her keys and bag too.

Japanese media company Tsutaya has just announced a new line of merchandise celebrating some of the greatest hits of shojo manga anthology magazine Ribbon, and while Saya has nothing against Hime-chan’s Ribbon or Gokinjo Monogatari, the two series whose merch she immediately knew she needed were Marmalade Boy and Kodomo no Omocha.

These keychains/bag straps perfectly replicate the series’ first tankobon (collected volumes), right down to the colorful stripped Ribbon Mascot Comics logo. While they’re small enough to fit in the palm of your hand, they stirred some big emotions in Saya, who remembers the excruciatingly long wait between chapters back when she was reading the series during their initial runs in Ribbon, which comes out just once a month.

For those who haven’t had the pleasure of reading it themselves, Marmalade Boy boy is a 1992-1995 series by manga artist Wataru Yoshizumi that begins with the most wholesome instance of spouse-swapping ever depicted in a fictional narrative, suddenly making high school classmates Miki and Yuu stepsiblings as well. Romantic misunderstandings, childhood friends who were harboring secret crushes, and exes who aren’t ready to let go, naturally, start piling up one after another in short order.

Kodomo no Omocha, also known as Kodocha or Child’s Toy, starts off with a more manic narrative, starring elementary school-age child actress Sana and her love-hate relationship with Akito, the troubled troublemaker in her class.

The straps aren’t solid plastic blocks, either. Open them up, and you’ll find that they’re actually mini notebooks, complete with a bit of character art.

The straps are priced at 825 yen, and if you want a larger expression of your ’90s shojo fandom, Tsutaya also has Marmalade Boy and Kodomo no Omocha tote bags for 1,320 yen.

Orders can be made online here through the Tsutaya online store.

— Do women who love manga have a harder time finding real-life romance?