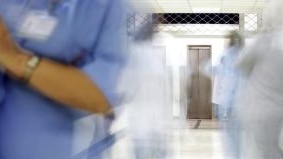 One in every 25 Health Service Executive (HSE) staff is currently off work due to Covid-19 infection or being a close contact of a case.

The 5,800 employees who are absent amounts to 4 per cent of total staffing and compares to 1,800 a month ago.

About 1,000 procedures have had to be cancelled due to the surge in cases, HSE chief executive Paul Reid said on Wednesday.

HSE staff are exhausted, frustrated and tired due to the pandemic, Mr Reid told the Oireachtas health committee. He pointed out staffing numbers have increased by 11,500 and beds by 800 since the start of last year.

A further 50 beds will be delivered by the end of this year and 296 more next year, HSE chief operating officer Anne O’Connor said.

Up to 350 ICU beds are to be made available under surge capacity during the current wave of Covid-19, Mr Reid told the committee.

Normally, about 300 beds are available, but this number is being increased in consultation with hospitals, who are still working through these arrangements, he said.

Mr Reid acknowledged difficulties people are having in being tested for the virus, but said 82 per cent were getting “first-day” appointments.

A total of 560,000 boosters have so far been administered, and a further 70,000 third shots given to people who are immunocompromised, Mr Reid said.

The administration of boosters to over-80s and residents of long-term care facilities is substantially complete, he said. More than half – 190,000 – of over-70s have been boosted along with 43,000 over-60s.

In the first week of administering boosters to over-60s, only 25,000 met the criterion of five months having passed since their primary vaccine, he pointed out. But this figure increased to 120,000 by the second week of the rollout.

Boosters for those with underlying conditions are being expedited, but people in their 50s will likely only start receiving booster appointments toward the end of December, he said.

There were 130 Covid-19 patients in ICU on Wednesday, he said.

Social Democrat TD Roisin Shortall asked why half the allocated home help hours have not been used this year, when 400 people are waiting for a carer to be assigned to them, and 100 patients are waiting in hospital for the provision of home care.

Ms O’Connor said funding was “better than ever” but securing qualified carers was a “real challenge” and impacting significantly on provision.

The HSE is looking at different way of engaging carers, including an internship approach, she said.