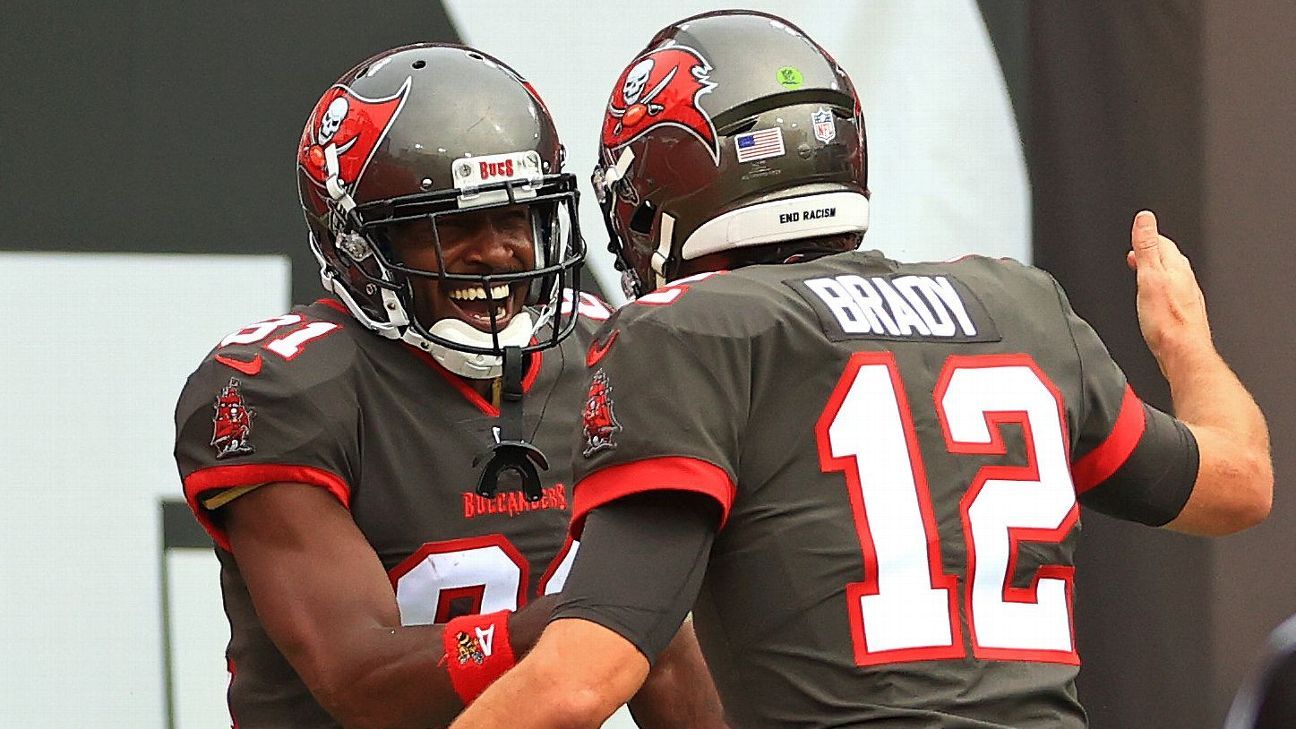 TAMPA, Fla. — Fresh off his release from the Tampa Bay Buccaneers, wide receiver Antonio Brown had a lot to say Friday, airing out his frustrations on everything from how the Buccaneers handled his ankle injury on Sunday to his relationship with Tom Brady being based on a shared interest in winning.

“To me, a friend is someone who’s got your back,” Brown said on the “Full Send Podcast” on Friday. “Not everybody in sports is going to be your friend. Tom Brady’s my friend why? Because I’m a good football player. He needs me to play football. People have different meanings of what friendship is.”

Brown’s comments about Brady were a sharp deviation from what he has said in the past, likening the seven-time Super Bowl-winning quarterback to a “big brother” and calling him a “role model” after Brady twice invited Brown to move in with him, first with the New England Patriots and then in Tampa Bay.

Brady has vouched for Brown on multiple occasions amid criticism of the wide receiver, who missed 11 games due to suspension over the past two seasons. Prior to signing with the Bucs in October 2020, Brown was suspended for eight games for violating the NFL’s personal conduct policy after pleading no contest to burglary and assault charges and receiving two years’ probation for his role in a clash with the driver of a moving-company truck driver. Brown also had been the subject of an NFL investigation following an accusation of sexual misconduct at his home by an artist who was working there in 2017.

“We all love him. We care about him deeply. We want to see him be at his best. Unfortunately it won’t be with our team,” Brady said Sunday. “I think everyone should be very compassionate and empathetic toward some very difficult things that are happening.”

On the “Full Send Podcast,” Brown at first noted that it’s not “personal” with Brady and called him “one of my close friends.” However, he also suggested that Brady might have been responsible for him not getting the contract he believed he deserved.

Brown signed a one-year deal this offseason worth up to $6.25 million. The incentive-laden deal carried a guaranteed $3.1 million with a $2 million signing bonus.

Brown referred to Brady as the “general manager,” a position that’s held by Jason Licht, and said the quarterback negotiated his contract. Licht told ESPN’s Adam Schefter that Brown and his agent attempted to get Brown’s remaining $2 million in incentives guaranteed but the request was denied.

“To say someone’s my friend — I’m out here getting ‘prove it’ type contracts where I’m out here, they got me trying to earn a million dollars to make some type of catches,” Brown said of Brady. “So to say you’re my friend — I shouldn’t be playing on those types of deals when I just came with you and won the Super Bowl.

“So I think people like to be around me and spend time with me but they’re not even seeing my value in that regards. If you check the stats and the history, which is what we get paid off of, which we go about, the work and the intangibles — I would think I could deserve more than be worrying about earning money instead of worrying about winning another Super Bowl.”

Along with the handling of his ankle injury, Brown’s frustration also stems from what he called unfair punishment when an NFL investigation this season determined that he and two other teammates — Mike Edwards and John Franklin III — used fake COVID-19 vaccination cards. He also has criticized how he has been portrayed by the media, saying two weeks ago, “You guys is all about drama.”

“I took a COVID suspension without evidence and information that was presented correctly and came back and got 100 yards on half an ankle — a deltoid, a torn ligament, bone fractures in my ankle. No one’s talking about the great things that I’ve been able to persevere through and do. I’ve been kicked off teams, written bad about, bad statements, created bad stories, and no matter what’s been said, I continue to persevere and come through with the work.”

“I know America love its bad guys — but I’m a great guy. I just won a Super Bowl, I’m an American hero, I persevered through numerous adversities.”

How does Brown remember Sunday’s events at MetLife Stadium, where he took off his jersey, threw his gloves and undershirt into the stands, jogged into the end zone and did jumping jacks, leaving the game in the third quarter while both teams were on the field playing?

He added, “How could you treat a person like that when they can’t work? You just cut ’em off the sideline? Like what am I a joke now?”

Coach Bruce Arians, who had publicly vouched for Brown as well and kept him on the team despite his three-game suspension, said there was no conversation with the receiver about his ankle during the game. Arians said Brown never told him he was too hurt to continue.

The two had texted about his ankle during the week, with Brown later posting screenshots of the conversation and Arians confirming that those were authentic. Brown was on the injury report after missing practice Thursday and Friday of game week but participated in the Saturday walk-though and was cleared to play on Sunday. But Brown said he was too hurt to continue playing.

“It’s about integrity. If you’ve got a player, players have rights. You’ve got a right to tell the coach, ‘Coach, I can’t go in the game,'” Brown said. “If it made the coach irrational or emotional, I can’t do my job, then that’s not humane.”

Brown indicated that he would like to continue playing football after he undergoes ankle surgery.

“Of course I’m planning on playing football next season. You see what I’ve been able to do on a hurt ankle?” Brown said. “It’s been four years since I’ve been able to be in this situation where I could be in good health and a good team that really has my back. These guys have been treating me to the opposite of who I am and I’ve been able to accept that role for a couple years out of respect.

In the meantime, Brown said he plans to be a coach for a team in the Fan Controlled Football League (FCF) — a league that featured Johnny Manziel last year and has owners that include Marshawn Lynch, Austin Ekeler and Tiki and Ronde Barber.

A source confirmed to ESPN’s Kevin Seifert that the league is working on an agreement to finalize Brown as a coach.