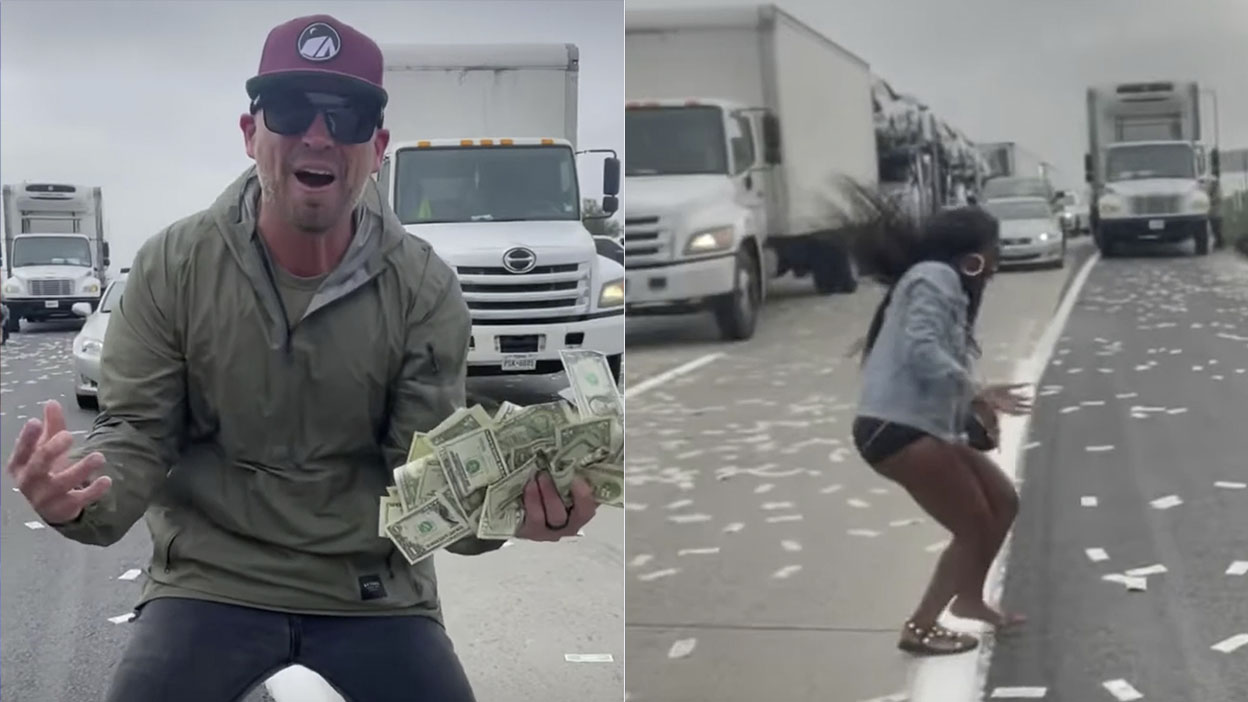 Authorities were working to identify drivers suspected of pocketing money that went flying from the back of an armored car in Carlsbad on Friday.

California Highway Patrol began receiving calls at about 9:15 a.m. about “a large sum of money in the roadway” on a section of Interstate 5, and that some drivers were getting out of their cars to collect the bills, KTLA’s sister station in San Diego, KSWB, reported.

A man and a woman suspected of taking cash were arrested after they got stuck on the freeway with their keys locked in the car, blocking traffic, according to CHP.

The incident generated significant buzz in the community. Soon, videos of people scooping up cash were widely circulated on social media and among local news outlets, KSWB reported.

Multiple screenshots from some of these videos were released late Friday by CHP, which was investigating the incident along with the FBI.

CHP said it was working to determine the identities of the motorists in the images and urged those who took bills to return the money within 48 hours “to avoid potential criminal charges,” KSWB reported.

“The CHP would like to thank those motorists who have already returned money to their local CHP office,” the agency said in a news release, “and remind the public to do the right thing and return any money they found on the freeway.”

Traffic on I-5 came to a standstill at around 9 a.m., after the doors of an armored truck came open on the freeway, sending cash flying. The driver of the armored truck started picking up the bills, but soon began recording others who left their vehicles to grab the cash, according to the CHP.

Travis Fisher, a driver caught in the chaos, told KSWB he initially thought he was approaching an accident when he saw the scene. Fisher estimated there were thousands of dollars scattered on the road.

“I see all these things floating around and I realize it’s money,” Fisher said. “It was pretty crazy. Just everywhere, there was a sea of bills, everywhere.”

To return money from the incident, CHP requests people contact its Dispatch Center at 858-637-3800.

KSWB’s Matt Meyer and Domenick Candelieri contributed to this story.