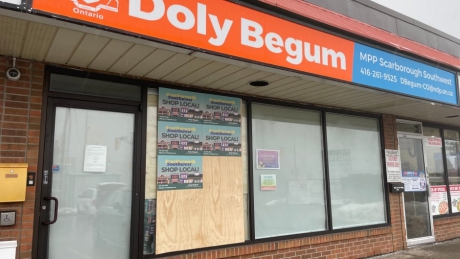 In the last few months, federal, provincial, and local elected representatives have seen their offices and homes targeted with violence. These are not random attacks. They come in the lead up to, during, and in the wake of the far-right-led convoy movement. These tactics are consistent with the street violence of fascist and white supremacist organizations.

In December, progressive and pro-public health St Catharines councillor Karrie Porterhad her home vandalized, part of a campaign of harassment from far-right anti-vaxxers. About a month later they returned to throw a large rock through her front window.

In January, Jill Andrew found her constituency office had been defiled by a large container of feces, and eggs. The Toronto NDP MPP is a woman of colour and a strong advocate for the LGBTQ+ community.

On February 15, Tory MPP Lisa Thompson had her office-front smeared with red paint. The Huron-Bruce rep is one of the few Conservatives to be targeted, but the Doug Ford Tories were not considered to be enthusiastic enough supporters of the convoy’s right-wing supporters.

Just the day before, in Welland, Liberal MP Vance Badaway’s office had its front window smashed. He told the press that he had received so many threatening calls and messages during the convoy blockades that he had instructed his staff to work from home and had left his office closed.

On February 19, NDP MPP Doly Begum’s office window was smashed. Begum represents Scarborough Southwest. The attack on her office came at midday on a Saturday.

The attacks are not limited to Ontario. In Parksville, on Vancouver Island, workers at NDP MP Gord Johns’ constituency office arrived to find windows and the door smashed.

At almost the same time, about 100 K up island, another NDP MP was targeted. MP Rachel Blaney’s office windows and doors were covered in anti-vaxx graffiti.

There may well be more examples in other parts of the country, and fears of more violence to come. This was the real threat the convoy posed, of far-right groups becoming linked, and their members becoming bolder with their racism, bigotry and violence. The threat is far from over, even if the trucks are gone.

One thing the convoy revealed, there are far-right social media “news” sources that would share such stories approvingly, encouraging other thugs to follow suit.

It is worth noting that the left, including myself, have a history of demonstrating at MP and MPP offices. When we do it, we do it in public, with banners and signs stating our grievances, with the intent of engaging local people in discussion. We don’t come like cowards in the night.