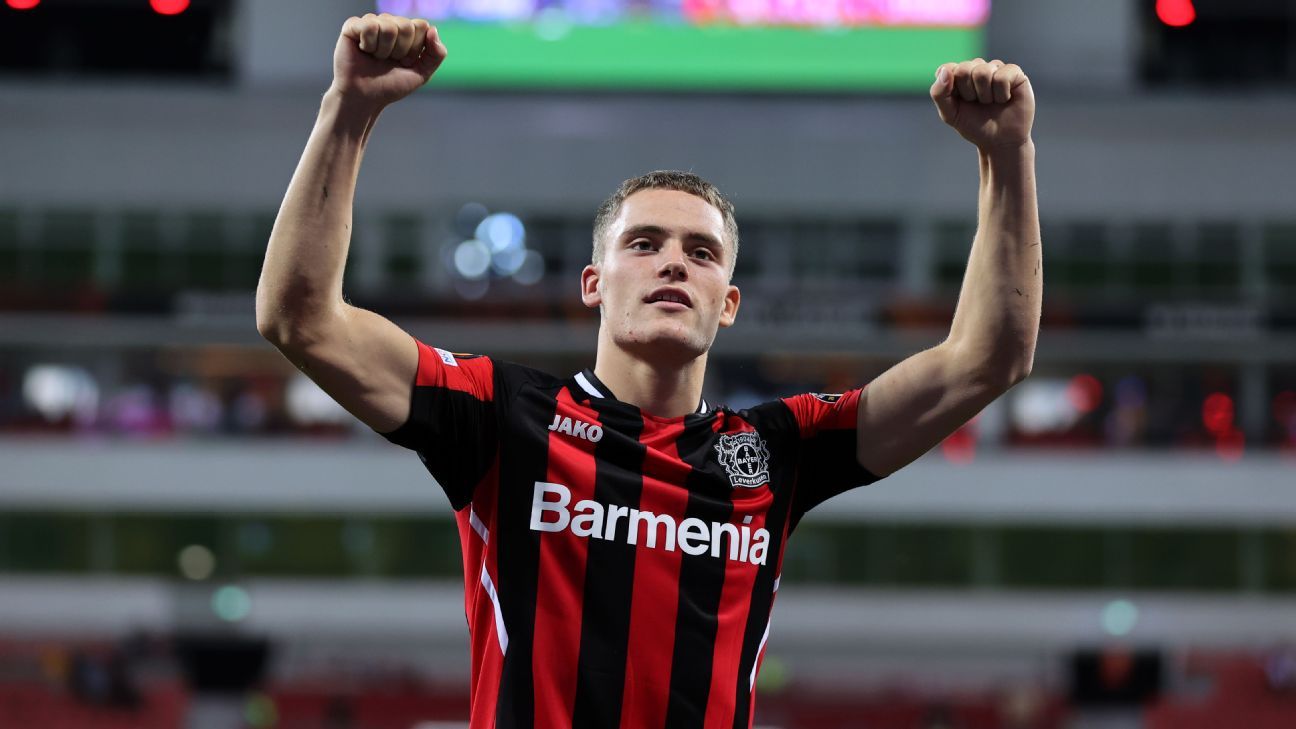 The 2022 January transfer window is closed, but there’s still plenty of gossip swirling about who’s moving where. Transfer Talk brings you all the latest buzz on rumours, comings and goings and, of course, done deals!

Wirtz, 18, is the latest youngster to come through at the Bundesliga club, having replaced Kai Havertz, who left for Chelsea in 2020 for a deal worth a potential €69.3 million.

The Germany international has scored seven goals and assisted 10 in the league this season, winning Bundesliga Player of the Month in September 2021. Leverkusen are hoping to keep the youngster despite the interest, but could face a battle to do so.

Romano reports that a move could be unlikely for this summer, prompting a potential move in 2023. For the three sides listed, the extra year could be seen as a positive, with all of them linked with a €75m move for Borussia Dortmund‘s Erling Haaland this summer.

Real Madrid have been in search of younger players in midfield, with the likes of Toni Kroos, Luka Modric and Casemiro all entering their 30s underscoring the need for central players in the future.

Barcelona could rival them, with the move for Wirtz fitting their model of bringing through youth talent, though whether they could compete financially during the club’s fiscal crisis is another question. For Bayern, Wirtz could serve as a potential replacement for Thomas Muller, whose deal expires in 2023.

11.45 GMT: Eintracht Frankfurt have confirmed the signing of striker Randal Kolo-Muani from Ligue 1 side Nantes.

Kolo-Muani, 23, will join Eintracht on a free transfer at the end of the season when his contract expires and has signed a five-year deal until 2027.

The France U23 international played at the 2020 Olympics as the country failed to get out of the group stages, while he has 10 goals in 29 games for Nantes this season.

Torre, 18, has made 21 appearances in the Spanish third-tier this season, scoring six goals and laying on six assists. The Spain U19 attacking midfielder reportedly has an €8m release clause in his contract and has also attracted interest from Real Madrid.

Gab & Juls debate whether Thomas Tuchel and his Chelsea players will be affected by Roman Abramovich’s decision.

10.28 GMT: AC Milan have reached an agreement with French club Lille to sign defender Sven Botman in the summer, according to Gazzetta dello Sport.

Botman helped Lille win the Ligue 1 title ahead of Paris Saint-Germain last season, finishing the 2020-21 season with the best defensive record in the division.

The Netherlands international had been the subject of interest from Premier League side Newcastle United in the January window, but Lille would not countenance letting him leave mid-season.

Reigning LaLiga champions Atletico are looking for a new specialist right-back to replace Kieran Trippier, who left the club to join Newcastle United in January.

Cash, 24, signed for Villa from Championship club Nottingham Forest in 2020, and has impressed since making the step up to the Premier League.

The Poland international has made 55 appearances in all competitions since his £14m transfer, and has been regular under both manager Steven Gerrard and his predecessor at Villa Park, Dean Smith.

A long-term target of Real Madrid, Mbappe has not signed a new contract with PSG and becomes a free agent in the summer.

“We have a possibility,” Leonardo said of Mbappe’s options of staying. “As long as there is no signature [with another club], we will try everything, we will do everything possible to retain him.”

While PSG have not given up hope of keeping the France international, Leonardo denied recent reports the club had offered Mbappe a two-year contract extension that would see him earn around €50m-a-season in addition to a €100m loyalty bonus.

“It is not true,” Leonardo said. “We have not sent a specific offer. There is an important element: I think the last thing we will put into this contract will be money… It’s not about that [money]. Kylian has such a great value that I believe that is secondary. I think that to put a figure he will take two minutes.

08.55 GMT: Napoli striker Victor Osimhen is on the radar of both Manchester United and Real Madrid, says Calciomercato.

The Nigeria international is rated as one of the best young strikers around but won’t come cheap as his contract does not expire until 2025.

08.21 GMT: Barcelona are reportedly in talks with Wolves midfielder Ruben Neves, according to the Daily Mail.

Neves, 24, has been linked with Man United and Arsenal in a £35m move, but Barcelona could work out a deal after the successfully negotiated the transfers of Adama Traore and Francisco Trincao between the two clubs.

Barcelona have a host of talented young midfielders, but need a bit more experience and the Portugal international could fit their style of play if they can manage to raise some cash.

08.00 GMT: Barcelona are in advanced talks to sign Chelsea’s Andreas Christensen and AC Milan’s Franck Kessie on free transfers when their respective contracts expire in the summer, various sources have told ESPN.

Sources add that Barca remain optimistic of closing a deal to bring in Christensen’s Chelsea teammate Cesar Azpilicueta, who is also in the final few months of his deal at Stamford Bridge.

An agreement has not yet been closed with either Christensen or Kessie, but a source close to the negotiations has told ESPN that both players are expected to move to Camp Nou ahead of next season “save any late twists.”

Talks have intensified with the pair following the closing of the January transfer window, with Barca hopeful of finalising the deals as soon as possible.

ESPN previously reported that Barca would target Christensen, Azpilicueta and Kessie on free transfers to strengthen in defence and midfield this summer to save money to fund a move for Borussia Dortmund striker Erling Haaland.

Gab and Juls discuss which of the Chelsea defenders would be a better fit for Xavi’s new-look defence?

– Lyon are set to begin talks with Chelsea over the permanent signing of wing-back Emerson Palmieri, reports Ekrem Konur. The Blues made an attempt to recall the Italy international from his loan with the Ligue 1 club in January following an injury to Ben Chilwell that has ruled him out for the rest of the season, however Emerson stayed on his loan. The 27-year-old has made 21 appearances in the league and now could stay longer.

– Amid reports of a potential exit for striker Lautaro Martinez in the summer, Tuttosport says that Internazionale are interested in Borussia Monchengladbach forward Marcus Thuram. Thuram, 24, has less than 18 months left on his deal and has struggled for minutes in the Bundesliga this season. That could lead to an exit for the forward, who can play anywhere across the front three.

– January saw the first two signings for Antonio Conte at Tottenham Hotspur in Juventus duo Rodrigo Bentancur and Dejan Kulusevski, but the summer window could provide a better barometer for how his Spurs side will look going forward. And with so much time to plan how his squad will look, the Daily Mail reports that the club are interested in adding RB Leipzig youngster Josko Gvardiol. The defender often plays on the left of a back three, something that would suit Conte’s style. The Bundesliga side are said to be reluctant to let the 20-year-old leave the club, though.

– Chelsea remain interested in a move for Juventus defender Matthijs de Ligt in the summer, but the Netherlands international could yet sign a new deal with the Bianconeri, according to Calciomercato. The Blues have been linked with a number of centre-backs for the future, with Thomas Tuchel set to lose as many as three of their own defenders as free agents at the end of the season. De Ligt, 22, is one of those that has been linked in a €120m move and the club remain interested. However, despite comments about the potential of leaving the Turin-based club a few months back, De Ligt could now sign a new deal after a change of heart.

– AC Milan have been offered a number of strikers for the summer as the Rossoneri look to freshen up their attacking ranks, says Rudy Galetti. The Serie A club have Zlatan Ibrahimovic, 40, out of contract soon, leaving Olivier Giroud, 35, as one of their only central striking options at the end of the season. As a result, the hierarchy have been offered a number of strikers who are set to be free agents themselves. Galetti reports that Torino‘s Andrea Belotti, Liverpool‘s Divock Origi and Andrej Kramaric of Hoffenheim have been suggested, with the club set to evaluate the options.