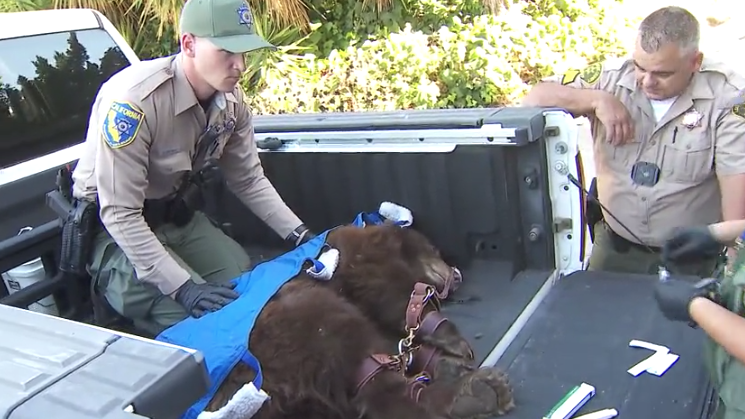 A bear was tranquilized after wandering around a San Dimas neighborhood Wednesday morning.

The bear was walking around residential properties in the area of Gladstone Street and Dallas Road around 10 a.m., neighbors told KTLA. At one point, it was even spotted near Shull Elementary School.

Officials with the California Department of Fish and Wildlife and the Los Angeles County Sheriff’s Department responded to the area and the bear climbed up an avocado tree.

Sky5 was overhead as officials surrounded the bear and eventually tranquilized it. It came back down the tree and went down after climbing a fence and going into another neighbor’s driveway.

It was then loaded in the back of a truck, video from the scene showed.

The female bear is about 1 to 2 years old and does not have cubs, Fish and Wildlife officials told KTLA. She was tagged and will be returned to her habitat at the Angeles National Forest, an official at the scene said.

Carrie Pouliot spotted the bear in her yard, but first thought it was a coyote.

When she realized it was a lot bigger than a canine, she shouted for her husband, shut the door and called 911.

By that point, however, police and wildlife officials had already responded. And she was able to watch the show from the comfort of her home.

Pouliot has lived in the neighborhood since 1976 and is used to seeing all kinds of critters — raccoons, coyotes, possums, rabbits — but never a bear.

“I know it doesn’t need to be here, but it was exciting,” Pouliot said.

She explained that she doesn’t live too close to the mountains and was surprised to see the bear wandering around her home. “How that bear got over here, I have no idea,” she added.