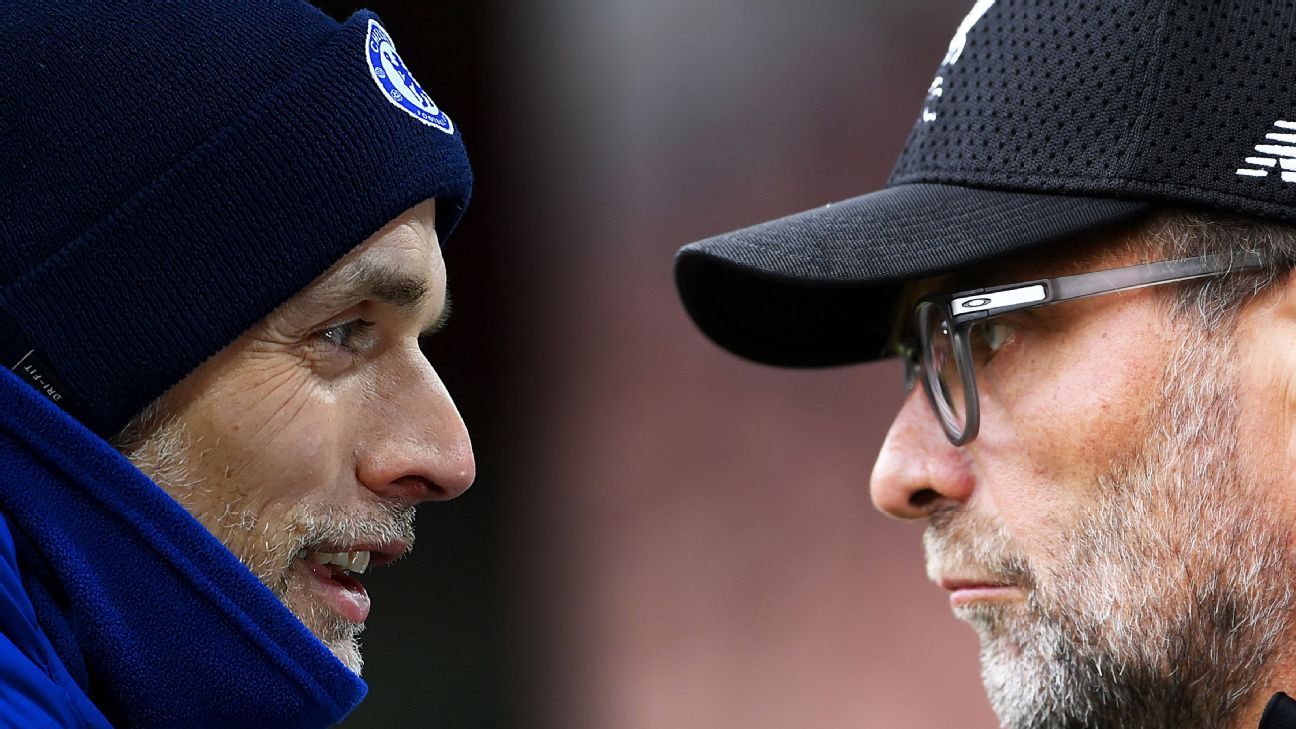 The two sides have enjoyed some memorable battles over the years — the 4-4 tie at Stamford Bridge in the 2008-09 Champions League quarterfinals, anyone? — but have been evenly matched in this season’s league games, with a 1-1 draw at Anfield in August followed by an enthralling 2-2 draw in London in January.

So what will Sunday’s showpiece final hold? Who needs a trophy more at this point? Which players need to step up or could prove decisive? And how will the two managers match up? Mark Ogden and James Olley get you ready for the big game.

Who needs this more?

Ogden: In many ways, the Carabao Cup is a trophy that neither team needs to win.

Both Liverpool and Chelsea have bigger priorities — the Premier League and Champions League, for a start — and they have each won the two big prizes in recent seasons. The pressure is off both teams on Sunday and Chelsea have already banked the UEFA Super Cup and FIFA Club World Cup this season, but if one team needs it more, it’s Liverpool, simply because Jurgen Klopp’s team have arguably not won the amount of silverware their performances have deserved over the past three or four seasons.

By winning the Carabao Cup, the Reds would somewhat address that imbalance, while also maintaining hopes of an unprecedented quadruple this season. Winning at Wembley could be Liverpool’s launchpad for a remarkable end to the campaign. From the other side, success for Chelsea would extend coach Thomas Tuchel’s trophy streak to four since taking charge in January 2021 — an obvious incentive for the German tactician.

Olley: There is a case for arguing this is more important for Chelsea, specifically Tuchel, given the wider picture. Chelsea aren’t going to win the Premier League and their indifferent form right now is in danger of dropping them into a scrap for a top-four finish. Tuchel isn’t close to the stage yet where he needs to fear for his job, but that point usually arrives quickly for Chelsea managers and another trophy would give him further credit in the bank to offset the disappointment of failing to mount a sustained title challenge.

Mark is right in that Liverpool should have more to show for their superb football over recent years, but the Premier League is suddenly within their grasp again and they were the first English side to win all six Champions League group-stage matches earlier this season. They have the two biggest prizes of all in their sights and therefore the Carabao Cup is a mere footnote to their season at this point.

Sunday won’t define Chelsea’s campaign either, but Tuchel is under more immediate pressure to prove he is continuing to take Chelsea forward. A first domestic cup success would be tangible proof of that.

Tuchel vs. Klopp: Who has the edge?

Ogden: Klopp has the better team and better individual players than Chelsea, so Tuchel has his work cut out in terms of devising a tactical plan to beat Liverpool. Right now, Liverpool are arguably the best team in Europe and their 6-0 win against Leeds in midweek underscored their incredible attacking threat.

If Liverpool perform to their best, they will win on Sunday. Sorry Chelsea, but everything is working for Liverpool at this moment in time and Tuchel’s players will have to stifle Mohamed Salah and Sadio Mane upfront, keep Fabinho contained in midfield, find a way to get past centre-back Virgil van Dijk and nullify the threat of full-backs Andy Robertson and Trent Alexander-Arnold.

Dan Thomas is joined by Craig Burley, Shaka Hislop and others to bring you the latest highlights and debate the biggest storylines. Stream on ESPN+ (U.S. only).

Chelsea have struggled to impress in recent games, although they have still been able to win. Against Liverpool, they can’t expect to be fortunate again unless Tuchel finds a way to repeat the end-to-end game that saw the two teams draw 2-2 at Stamford Bridge in January. Liverpool have won 10 out of 11 games since then, though, and they have moved up another level.

Olley: The meeting between these two last month was overshadowed by Romelu Lukaku‘s omission following an unsanctioned interview in which he talked about one day returning to Inter Milan. And here we are again: Lukaku was dropped for Tuesday’s win over Lille, with Tuchel claiming his €115 million striker was tired, a claim quietly denied by the player’s camp.

Last month, Tuchel started the game against Liverpool with Kai Havertz upfront supported by Mason Mount and Christian Pulisic. The idea was to win the ball high up the pitch and break quickly in transition, something replicated to some extent against Lille, and so all eyes will be on Tuchel’s team selection. He opted for a 4-1-4-1 shape against Crystal Palace and Lille, but a return to 3-4-2-1 must appeal with Cesar Azpilicueta and Marcos Alonso fit again to play as wing-backs.

Shaka Hislop feels Chelsea could play more to Romelu Lukaku’s style but still feels the striker should be offering more for the Blues.

Key players for both teams

Ogden: Liverpool are blessed with a number of key players (Salah, Van Dijk, Alisson Becker, Alexander-Arnold), but nobody has excelled quite as much as Fabinho in recent weeks and the Brazilian midfielder will be a key figure against Chelsea. If Tuchel opts for Mateo Kovacic and N’Golo Kante in midfield, it will be an attempt to diminish Fabinho’s influence on the game, but his powerhouse performances this season suggest Kante and Kovacic will have to focus solely on keeping Fabinho out of the game. If Tuchel uses Jorginho, then Fabinho will have more freedom to dominate the central third of the pitch.

Whoever wins the midfield battle will have the best chance of winning, but if Chelsea are to succeed, they need Havertz to deliver on the big occasion again or hope that Lukaku (if selected) can find his way to goal. The Belgian doesn’t do that often enough against the top clubs, but Sunday would be a good time to start.

Olley: Lukaku was signed to win games like this, but let’s instead focus on Christian Pulisic. The United States international told ESPN in a recent interview that he was struggling to find his rhythm due to a lack of game time, but this week he has started back-to-back matches for only the third time this season. With Hakim Ziyech and Mount both fitness doubts — although the latter was fit enough for the bench against Lille — Pulisic has a strong case to start again as he hopes to make it third time lucky at Wembley.

Pulisic scored and was injured as Chelsea lost the 2020 FA Cup final to Arsenal. He played just 22 minutes as a substitute as Leicester beat them in the 2021 final. Perhaps this is Pulisic’s chance to be on the right side of history. If he scores on Sunday, he will become only the sixth Chelsea player to find the net in both of England‘s domestic cup finals.

Fun fact/something to watch for

Ogden: If Liverpool win, it will be the club’s 66th trophy, moving them level with Manchester United to become English football’s most successful club. That figure includes everything from Club World Cups to Community Shields, with more than a few league titles and Champions Leagues thrown into the mix too.

To put Liverpool and United’s trophy hauls in perspective, Arsenal are third on the list with 48, while Chelsea are in fourth with 34. Manchester City‘s recent dominance has delivered plenty of trophies since Sheikh Mansour bin Zayed al Nahyan bought the club in 2008, but they have still managed just 28 trophies in their history. So if Liverpool win the Carabao Cup/EFL Cup for a record ninth time, they will be on course to claim the top spot for themselves if they also win at least one of the Premier League, Champions League or FA Cup this season.

Olley: Chelsea are the first team in English football to contest a domestic final in six consecutive seasons: (FA Cup: 2017, 2018, 2020, 2021; League Cup: 2019 and 2022). They reached the final by keeping three consecutive clean sheets, too. Only one team (Swansea City in 2013) have ever won the competition without conceding a goal from the quarterfinal stage onwards.

It is in part a reflection of the improvement in Kepa Arrizabalaga — the world’s most expensive goalkeeper at almost €80m, yet Chelsea’s second choice behind Edouard Mendy, who has barely put a glove wrong in the past year. Kepa was dropped for the Club World Cup final in Abu Dhabi earlier this month, but he’s started every Carabao Cup game this season. Should he get the nod again, as expected, it will stir memories of his antics in the 2019 final, when he refused to be substituted as the game against Manchester City approached penalties, triggering an apoplectic reaction from then-Blues boss Maurizio Sarri.

Ogden: Liverpool 3-1 Chelsea. Liverpool are flying at the moment and they can sense a chance to make history this season. Chelsea just haven’t been playing well enough to suggest they can beat Klopp’s team.

Olley: Liverpool 2-1 Chelsea. Chelsea have the ability to rise to any occasion — last year’s Champions League final is proof of that — but Liverpool are in irrepressible form at present and deservedly start as favourites.