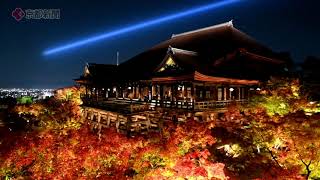 The agency’s forecast for December to February says western Japan can expect more snow than usual for the period.

Snowfall in the country’s east is expected to be average or higher. Northern Japan will likely have average snowfall.

Officials expect more cold air to flow in this winter, due partly to disruptions to the course of westerlies caused by a La Nina event.

An agency official says heavy snowfall is possible as early as December.

Autumn colors on display in Kyoto

The autumn leaves are at their peak in many parts of Japan. Visitors have been flocking to the ancient capital of Kyoto to enjoy the colors.

Visitors and local residents in the northern Japanese city of Sapporo are enjoying nighttime winter illuminations in a park, along streets and in two popular squares.

Japan Airlines has become the country’s first carrier to introduce a digital system for passengers to prove they are vaccinated against COVID-19. The move comes after the United States began accepting fully inoculated visitors.