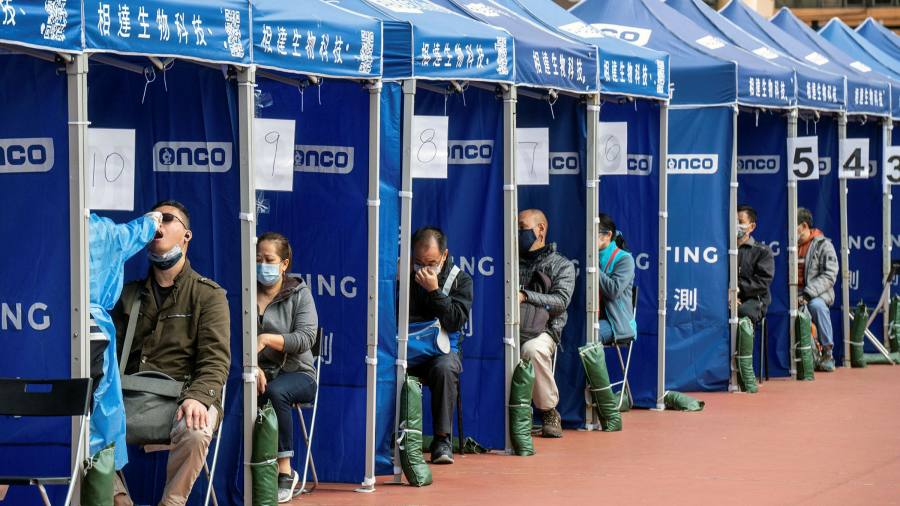 More than a year after Sushmita Gurung was forcibly separated from her two children by Hong Kong medical authorities after testing positive for Covid-19, her five-year-old daughter still mutters phrases such as “no, no, don’t go” in her sleep.

Gurung was sent to a quarantine facility while her husband, daughter and two-month-old son were placed in separate wards in hospital as part of Hong Kong’s strict policy of isolating anyone who is infected — even if they have only mild symptoms or are asymptomatic — and close contacts.

Gurung’s daughter was isolated for 10 days and her son for almost three weeks, and neither parent was able to see them. “I was so far away, I could do nothing but cry,” Gurung said.

The family’s experience represents one of the worst fears of a population on edge in Hong Kong, as authorities have ratcheted up restrictions in China’s biggest outbreak since the start of the pandemic.

The financial hub is one of the most isolated cities in the world, with arrivals forced to endure a two-week hotel quarantine if they can get in — a ban on inbound flights from nine countries, including the US and UK, was recently extended to April.

WhatsApp and Facebook groups are now full of residents looking to leave over worries that families will be separated if placed in quarantine, after Carrie Lam, Hong Kong’s chief executive, announced mandatory testing for the entire population of 7.4mn this week.

The anxiety and challenges for global companies to operate in the financial hub have added to an exodus from the city since a crackdown following pro-democracy protests in 2019, with a net outflow of about 54,000 people from Hong Kong this month, according to government data. The territory’s commitment to a controversial zero-Covid strategy has made it clear that Beijing’s policy priorities are paramount and will be enforced even if they are not in Hong Kong’s best interests as an international financial centre.

Mass-testing and isolation are crucial features of China’s strategy. But they have typically been deployed when dozens of cases emerge — as happened in Xi’an, a provincial capital with 13mn people which was put into complete lockdown from late December for about a month.

Hong Kong has yet to start its testing drive, even though there have been more than 80,000 cases since the latest outbreak began in late December. With only about 10,000 isolation beds and construction teams racing to build temporary facilities equipped with at least 70,000, it is not clear how the government will be able to isolate everyone who tests positive, let alone their close contacts. Researchers at the University of Hong Kong estimate that a third of the population could be in isolation by mid-March and the territory’s “fifth wave” outbreak could peak at more than 180,000 cases per day.

The seemingly impossible task of crushing the outbreak has been handed to Hong Kong by Chinese president Xi Jinping, who has ordered the territory to return to its previous zero-Covid status at any cost. While it would be much easier to reserve hospital beds for severe Covid cases and let mild and asymptomatic ones isolate at home, that would mean allowing the virus to become endemic in China’s premier international financial centre and represent the first major failure of Xi’s zero-Covid policy.

“If we live with the virus, the mainland government would definitely be concerned about whether the virus would spread into the mainland,” said Tam Yiu-chung, Hong Kong’s most senior representative to China’s rubber-stamp parliament.

“The mistake [Lam] made was not making vaccinations mandatory,” said one person close to the chief executive. “It came down to the president finally blowing his top and reading the riot act to [Hong Kong’s] government. Suddenly everyone is scrambling around.”

In anticipation of the coming deluge, Lam has tightened curbs, such as limiting in-person dining at restaurants to two people, with venues required to shut by 6pm except for take-out service.

Lam has consistently said she would not impose a total lockdown but some infectious disease experts and pro-Beijing politicians believe some form of stay at home order is inevitable and could be announced as soon as next week.

Michael Tien, a prominent pro-Beijing lawmaker, advocates a nine-day lockdown with exceptions only for essential personnel and brief shopping trips — one person per household for one hour each day — for everyone else. “[Beijing] doesn’t think what we are doing is going to work,” he said. “Mandatory testing without any lockdown is ineffective. We need mandatory testing with a compulsory lockdown. This is what Beijing wants.”

That looming threat has forced many to exit. 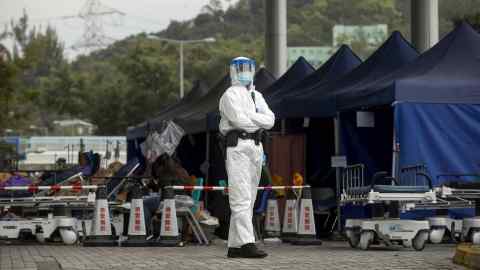 A British mother of three who manages a Hong Kong-based hedge fund flew to London last week and is unsure if she will return. “The reason I left was the potential of being separated from my kids if one of them was positive,” she said. “I’m not alone. I don’t know many working mothers who are staying, they’re all getting out this week or next.”

Joe Chu runs a relocation business and says business is booming. “We moved about 4,000 families last year [and it] should be the same this year, at least,” he said. “It’s 2,000 in a normal year.”

One of the few constraints has been labour: 10 per cent of his packers are in isolation.