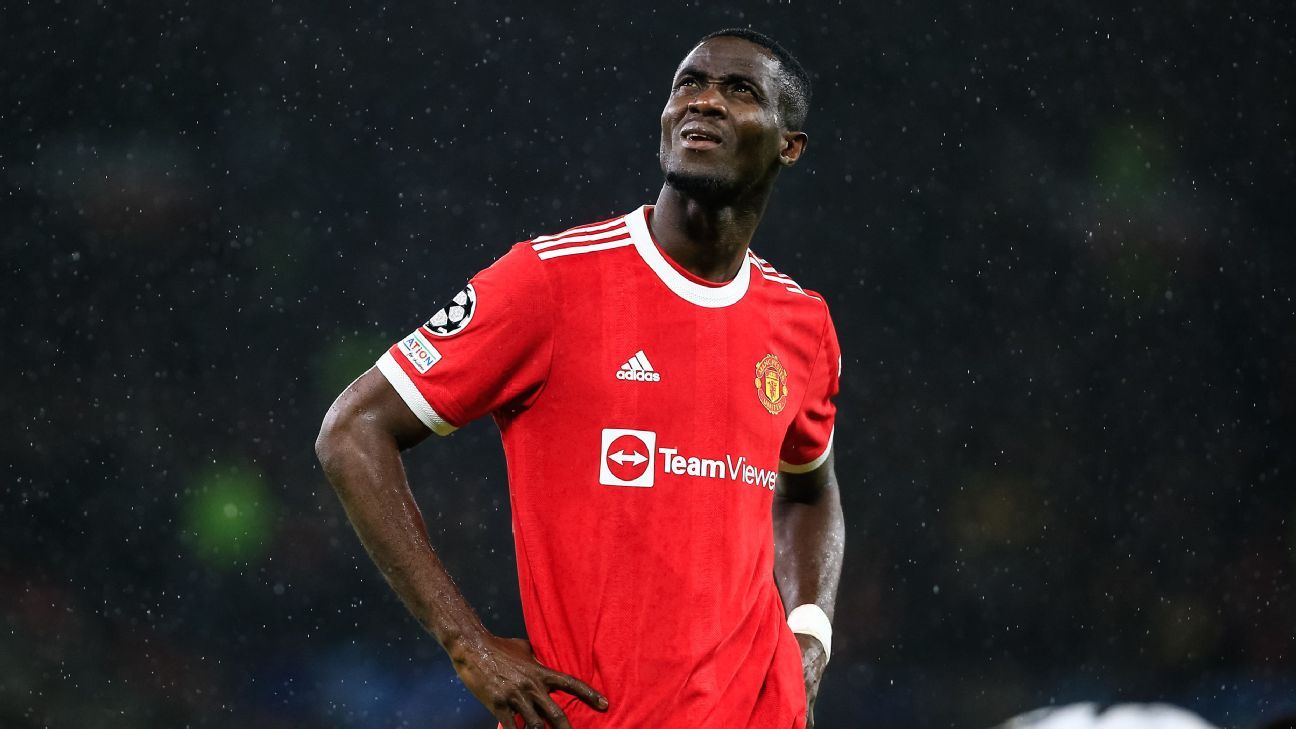 The 2022 January transfer window is open (find out when it closes here), and there’s plenty of gossip swirling about who’s moving where. Transfer Talk brings you all the latest buzz on rumours, comings and goings and, of course, done deals!

Lille have issued a hands-off warning for in-demand centre-back Sven Botman, who had been heavily linked with the likes of AC Milan and Newcastle United.

Calciomercato, however, says that the Rossoneri have a shortlist of four other players that they will look to sign instead of the Dutchman.

Milan have a long-standing interest in Paris Saint-Germain‘s Abdou Diallo, and the report claims that this still remains, though a move could materialise only if the French giants are willing to loan out the defender, who played in Senegal‘s 1-0 win over Zimbabwe in the Africa Cup of Nations on Monday.

Next on the list is Manchester United‘s Eric Bailly, following reports elsewhere that the Ivory Coast international is frustrated with the lack of opportunities he has had at Old Trafford in recent times. This has continued under Ralf Rangnick, with Bailly having managed just four Premier League starts all season.

Tottenham Hotspur‘s Japhet Tanganga has also been mentioned, with the 22-year-old another defender who hasn’t always found Premier League minutes easy to come by this term.

Finally, 19-year-old Empoli centre-back and Italy under-20 international Mattia Viti is also of interest to Milan.

Fellaini, 34, has been playing in China since 2019 with Shandong Taishan and extended his contract in June until 2025.

The Belgium international also reportedly has Galatasaray and Besiktas keen to sign him, alongside clubs from Qatar and Dubai.

Chiesa suffered a cruciate ligament injury which rules him out for the rest of the season, with Juve keen to bring in a fresh face in January.

As a result, Arsenal may profit as Juve are looking to move on one or both of Dejan Kulusevski and Arthur, players the Gunners have been linked with.

11.00 GMT: Mo Salah‘s Liverpool contract is set to expire in the summer of 2023, but the Egypt forward says it’s not up to him whether he extends it or not.

“I want to stay, but it’s not in my hands. It’s in their [Liverpool’s] hands,” Salah told GQ. “They know what I want. I’m not asking for crazy stuff.”

For Salah, it’s more about recognition than money.

“The thing is when you ask for something and they show you they can give you something,” he says, they should, “because they appreciate what you did for the club. I’ve been here for my fifth year now. I know the club very well. I love the fans. The fans love me. But with the administration, they have [been] told the situation. It’s in their hands.”

10.28 GMT: Isco “has refused to accept any of the offers that have come his way” to leave Real Madrid during the January transfer window, Marca reports, preferring to wait until the summer when his contract expires.

The newspaper quotes the player’s agents as responding with an abrupt “that team doesn’t enter into the plans we have for Isco” when informed of any interest so far, with Serie A’s Fiorentina the latest club to make contact.

The playmaker, 29 — who has barely featured for Madrid this season — hopes that being a free agent next summer will increase his chances of joining a top club that will compete for trophies.

10.04 GMT: Barcelona have held talks over a January move for former Chelsea midfielder Oscar, according to TNT Sports Brasil.

Oscar, 30, has been playing for Chinese side Shanghai Port since 2017 following five years in the Premier League. However, he’s now keen to return to Europe and would be willing to accept a reduced salary to do so.

Barca have supposedly discussed a move with his agent, Kia Joorabchian, but are not willing to commit to anything at this stage of the window. The Catalan club are prioritising other positions, with coach Xavi Hernandez keen to add another striker to the squad, but have not completely ruled out revisiting a move for Oscar later this month.

The main problem facing Barca this month is their salary cap. Philippe Coutinho‘s move to Aston Villa and Samuel Umtiti‘s contract renewal allowed them to register €55m signing Ferran Torres this week, but any more incomings will depend on departures.

09.33 GMT: Real Madrid midfielder Toni Kroos has declared he wants to continue at the Bernabeu beyond his current contract.

Kroos, 32, becomes a free agent in June 2023 and is keen to end his career with Los Blancos. The Germany international joined Madrid from Bayern Munich in the summer of 2014 for around €30m and has won two league titles and three Champions League trophies since.

“I want to finish my career at Real Madrid and it will happen,” hetold Sky Germany. “I will only focus on this club. It is my eighth season here and it is an incredible relationship that I would never risk it. I know what I have at this club and the club knows what it has with me. At some point we will talk in a very relaxed manner. Trust is the foundation of everything.”

However, Kroos added there are certain conditions that must be met before he extends his contract with Madrid.

“I still feel totally fine, but a number of things have to happen,” he said. “The first thing is that the level of the team and mine has to coincide. The second, that my fitness has to be there. And the third, that my desire has to be there. When all those things come together, we’ll talk. We will talk at some point and if not, I still have a contract until 2023.”

09.19 GMT: Rayo Vallecano goalkeeper Stole Dimitrievski is not aware of any interest from Barcelona amid reports he is on the radar of the Catalan club.

The North Macedonia international has not featured in Rayo’s last two games, prompting speculation he could leave in the January transfer window.

“Hearing things like this makes you feel happy and grateful because surely I have done something good,” he said in AS. “But I’m very focused on working for the team and continuing to add. I do not have any information [regarding Barcelona’s interest] and directly I would not like to know it because it can affect my day to day. I am a very calm and serious person. Barcelona sounds today, Atletico tomorrow, but you have to remain focused. I have train well, play well … and whatever has to come will come. Obviously anyone wants to improve and play for a big team but I’m very focused on Rayo.”

Dimitrievski, 29, went on to explain that he has missed Rayo’s last two games due to a minor injury. He has a contract with Rayo until June 2024.

08.55 GMT: Fabrizio Romano reports that Inter Milan are hoping to get midfielder Marcelo Brozovic to sign a new contract in January.

Brozovic, 29, is a free agent in 2022 and has yet to agree terms. The Croatia international has attracted attention from plenty of top clubs in Europe but is keen to stay at Inter.

Trippier joined Newcastle last week in a deal worth an initial £12m plus add-ons with Atletico boss Diego Simeone admitting he was sad to see the England international depart but that it is “time to look ahead and look for alternatives to make things work.”

Sources have told ESPN that the process has led to the identification of four possible candidates with Wass and Azpilicueta joined by Arsenal’s Cedric Soares and Wolves’ Nelson Semedo.

Atletico are holding conversations with representatives of the four players to determine which option is the most feasible.

08.00 GMT: Tottenham Hotspur are in talks with Wolves to sign winger Adama Traore in a deal which could be worth around £20m, sources have told ESPN.

The 25-year-old is interested in a move to north London and Spurs boss Antonio Conte is keen to strengthen his squad this month after being alarmed by a series of disappointing displays since succeeding Nuno Espirito Santo in November.

Traore has 18 months left on his contract and Wolves are ready to cash in on a player who sees his future elsewhere.

Reports in Spain have suggested Barcelona may be interested in Traore. This would complicate the situation as Traore has strong links with the club having been born in the city before coming through the ranks at Camp Nou prior to leaving for Aston Villa in 2015.

However, sources have told ESPN that Spurs are upbeat over their chances of signing Traore, who is viewed by Conte as a strong wing-back option in his preferred 3-4-3 system.

– Following the news that Lorenzo Insigne will join Toronto when his Napoli contract ends, the Serie A outfit are already on the lookout for a new winger, reports Calciomercato. Feyenoord’s Luis Sinisterra is the man they have their eyes on, with Napoli sporting director Cristiano Giuntoli expected to make contact with the Colombian’s agents in the coming days.

– Sky Sports Deutschland have suggested that Borussia Dortmund are looking at Freiburg‘s Nico Schlotterbeck and Zurich‘s Becir Omeragic as they aim to strengthen at the back. A move for the former would require approximately €25m in the summer, with Bayern Munich and some Premier League clubs having also shown interest. It is suggested that AC Milan, Lyon and Sevilla are reportedly considering the latter.

– Newcastle United have opened talks with Stade de Reims over France U-20 striker Hugo Ekitike, as has been reported by Sky Sports, who add that the Magpies want a frontman before they face Watford on Saturday. The 17-year-old made his Reims debut in August but has already registered eight goals and three assists in 17 Ligue 1 appearances this season. Talks are said to have been positive for a deal that could be close to €35m.

– More than four clubs are looking at signing Borussia Monchengladbach midfielder Denis Zakaria in July, according to Fabrizio Romano, with the Switzerland international set to be a free agent by then. Manchester United are interested but they have made no official bid to Gladbach yet.

– Lyon will look to sign Paris Saint-Germain left-back Layvin Kurzawa if Chelsea recall Emerson Palmieri from his loan early, reports Foot Mercato. There is the possibility that the Italy international could be brought back to Stamford Bridge following Ben Chilwell‘s injury, so Lyon are preparing for what to do if they lose him. They have already made contact with representatives of Kurzawa, who is open to leaving PSG.

– Australia international Milos Degenek has confirmed that he is leaving Red Star Belgrade. With fellow Aussie centre-back Harry Souttar out for the season because of a knee injury, the 27-year-old is reportedly on the hunt for regular first-team football in an effort to cement his position with the Socceroos ahead of the 2022 World Cup.