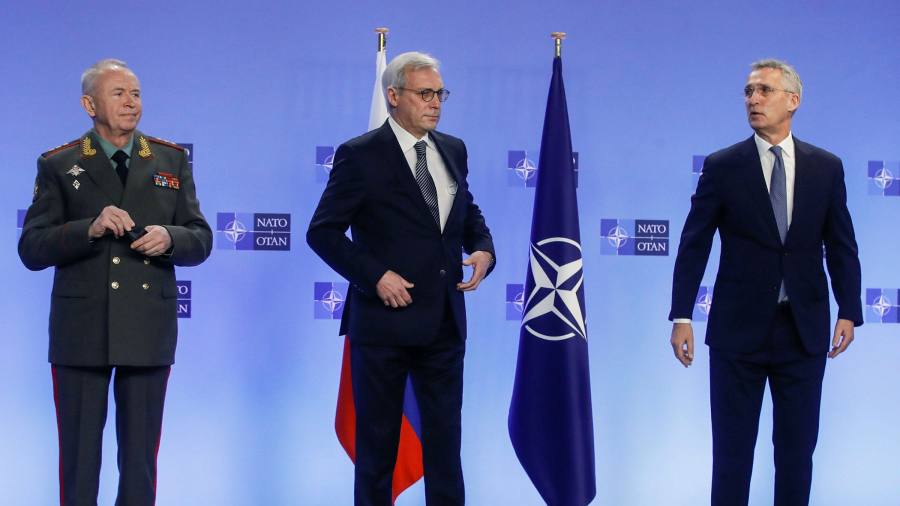 Nato has offered Moscow further talks on arms control in a bid to prevent further Russian aggression against Ukraine, but the Kremlin has so far not accepted.

Speaking after nearly four hours of talks with Russian officials in Brussels, Nato’s secretary-general Jen Stoltenberg said the alliance was prepared to discuss limits on missile deployment and military exercises as well as measures to improve transparency and communications.

Russian negotiators needed more time to consider the offer, but had not rejected it, Stoltenberg said.

“Our differences will not be easy to bridge,” he said, adding that allies were “clear-eyed about the prospects for progress”.

Wednesday’s meeting was the first gathering of the Nato-Russia Council for two years and was the second of three sets of talks this week intended to dissuade Russia from attacking Ukraine. Moscow has amassed 100,000 troops along Ukraine’s borders and has threatened military action if its demands to redraw European security arrangements are not met.

These include bans on further Nato expansion and on Nato military activities in states that joined the alliance after the end of the Cold War.

Sherman said she had not heard anything substantively new from the Russian side on Wednesday, following lengthy bilateral US-Russian discussions in Geneva at the start of the week where she laid out “several preliminary ideas” for arms control, limits on military exercises and improved communications.

“These are all beginning meetings around an incredibly complex set of issues,” she said. But she insisted that “we are not dragging our feet”.

Stoltenberg said Nato allies were “ready to meet again with Russia to have discussions in greater detail, to put concrete proposals on the table and to seek constructive outcomes”.

He said they wanted to explore ways to increase transparency around military exercises, prevent dangerous military incidents and reduce space and cyber threats, as well as reciprocal limits on the deployment of intermediate range missiles.

He added that the alliance wanted to discuss with Moscow ways of improving military communication channels and said Nato members proposed opening reciprocal representative offices and re-establishing military dialogue. Last year, Russia closed its mission to Nato and the alliance’s office in Moscow after Nato expelled eight diplomats in the mission for being “undeclared intelligence officers”.

Western powers have called on Moscow to de-escalate its aggressive military posture against Ukraine in return for more detailed negotiations on European security arrangements.

Sherman said “it was hard to have dialogue, to have diplomacy that is conducive to success, when you have 100,000 troops, live fire exercises and disinformation”. But she suggested a pullback of Russian forces was not a precondition for further dialogue.

Talks between Russian and western powers will move to Vienna on Thursday for discussion among representatives of the 57-member Organisation for Security and Co-operation in Europe.

Sherman said Russian president Vladimir Putin would soon after have a choice to make.

“There is progress to be made,” she said. “Russia will have to decide whether this is really about security and whether they are willing to engage or whether this is just a pretext. They may not even know yet.”