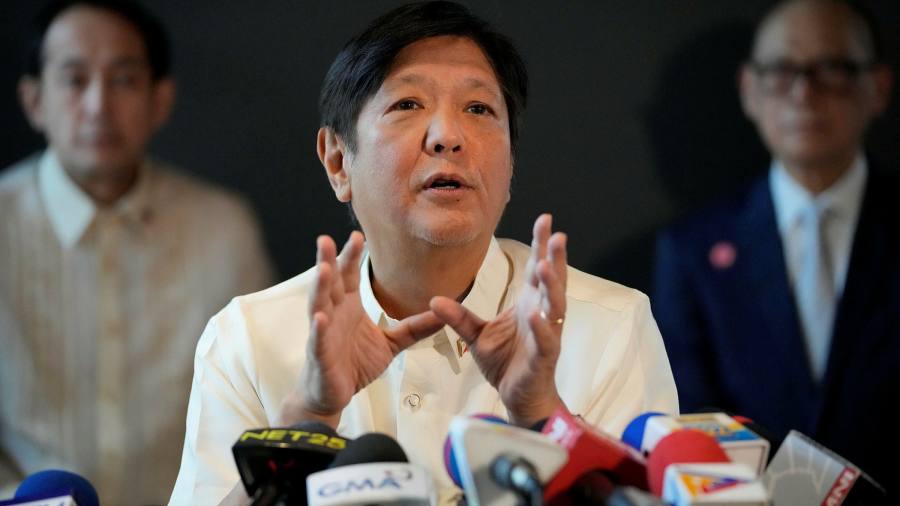 Ferdinand “Bongbong” Marcos Jr’s economic policy chief has dismissed concerns the new administration in the Philippines will be prone to the corruption and mismanagement that proliferated under the president-elect’s father.

Benjamin Diokno, who serves as the country’s central bank governor and is set to become finance secretary pending confirmation next month, also said the Philippines was positioned to grow its way out of the debt it incurred during the Covid-19 pandemic and would not need to raise taxes in the administration’s first year in office.

He said Marcos Jr “has put in place a team that is not political and I don’t see any hint of cronyism. I am very confident that he wants to put up a team that will really solve many of our problems involving poverty, involving the economy, involving our debt problem.”

On Wednesday, the peso dropped by as much as 0.6 per cent against the dollar to a low of 54.615 pesos, its weakest level since 2005. The decline reflects the obstacles Diokno and his team will face as they seek to sustain growth and pay down debt in a global environment of rising inflation and interest rates.

Marcos Jr, the son of the late dictator Ferdinand Marcos, will be sworn in on June 30. He won a six-year term last month with the help of a social media campaign that opponents said misrepresented the economic record of his father, whose final years were marked by stagnation, corruption and misuse of state funds.

During Marcos Sr’s two decades in power, he plundered billions of dollars worth of state assets, according to Philippine officials who have tried to recover it after his 1986 ouster in a popular revolt. The family has maintained that they obtained their wealth legitimately.

After giving few details on his policies while campaigning, Marcos Jr eased concerns in the business community when he named Diokno, who also served in then-president Corazon Aquino’s administration, as head of his economic team.

Peter Mumford, an analyst at Eurasia Group, said in a note published last week that Marcos had named “credible, experienced” people for many important cabinet positions and appeared “intent on preventing his family or the other political dynasties backing him from having too much power”.

The Philippines, like most other big economies in the region, is rebounding strongly as it reopens after strict lockdowns imposed during the pandemic. However, government debt has ballooned after the country battled one of south-east Asia’s heaviest Covid caseloads and borrowed heavily to keep citizens and companies afloat through lockdowns.

“I think what I want to do is to keep the growth momentum going during the entire term of the president, and I think growth will solve a lot of our potential problems,” Diokno told the FT.

The country’s public debt to gross domestic product ratio of about 64 per cent was “not really scary” and “pretty manageable”, he said.

The Philippine economy grew by 8.3 per cent in the first quarter of this year compared with the same period in 2021 “and we expect the second quarter to be even higher”, Diokno said.

Growth would be curbed by the war in Ukraine and the global slowdown, he conceded, “but on an annual basis we expect the economy to grow between 7-8 per cent this year and 6-7 per cent for the next five years”.

Carlos Dominguez, the current finance secretary, said last month that it was “critical” that the next administration undertook a fiscal consolidation plan to reverse within 10 years an additional 3.2tn pesos ($59bn) of debt incurred by the government during the pandemic.

Diokno confirmed that he planned to present a five or six-year medium-term fiscal programme next month that would be “exactly the same plan that is handed over to us by Secretary Dominguez”.

However, he added: “It will not necessarily be focused on raising new taxes because we honestly believe the outgoing president is handing over a much superior tax system to what he inherited.” As with Marcos Jr, Duterte — a populist strongman whose term was marked by harassment of critics and a drugs crackdown that killed thousands — had left the management of the economy mostly in the hands of non-political technocrats.

Reforms pursued during Duterte’s term included an overhaul of the tax system under which levies on cigarettes and sugary drinks were sharply raised, while income taxes were cut and administration was improved.

A law passed in March allowed foreign investors to fully own companies in sectors such as airports, expressways and railways.

While not ruling out tax rises, Diokno said there would be “maybe no [new] tax for the first year of this administration”.

He added: “I am going to focus on keeping the growth momentum going, because I truly believe a strong economy would bring in more revenues.”