It's one of the biggest gaming series of all time and now Far Cry is back with another sequel to the hugely successful game franchise by Ubisoft.

Far Cry 6 is familiar, it's chaotic, it tells a captivating story and it's ridiculously fun. But does the same formula hold up again (and again)?

If you loved the previous games you'll more than likely love Far Cry 6, but if you're looking for something completely new — this isn't it.

This time around you play as Dani Rojas (male or female, your choice), an orphan turned guerrilla who joins the rebel cause, Libertad, with the goal of taking down a malicious dictator, played by Giancarlo Esposito, who at the same time is trying to raise his young son.

READ MORE: Kena: Bridge of Spirits is a game about forgiveness and moving on 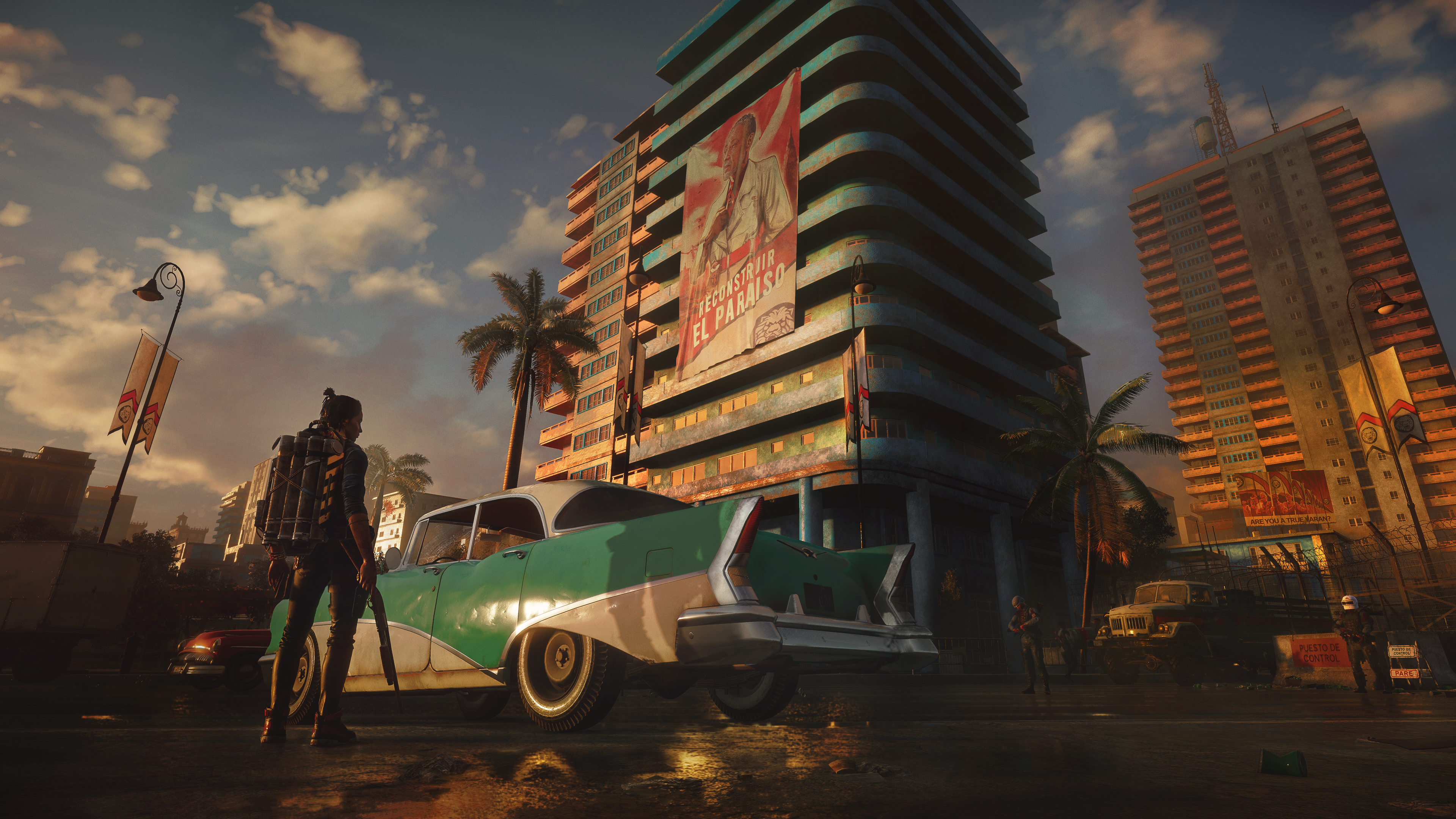 Far Cry 6 boasts a beautiful, large open world. The island of Yara has it all. Swamps, tropical beaches, forests, cliff tops, cities and slums. There's no shortage of biomes to explore at any time of day.

There are hundreds of items to collect, military bases and checkpoints to conquer, hideouts to make claims, treasures to find and vicious animals to hunt.

All the gruesome and over the top healing animations remain in place, from cauterising a wound with a cigar to pulling out a bullet with dirty pliers — it's classic Far Cry.

When you boot up the game for the very first time Far Cry's accessibility is on show, from in-depth audio options to visual configurations — all the settings can be adjusted from the get go. Developers Ubisoft has made sure everyone is able to play this game.

A bad guy with a familiar face 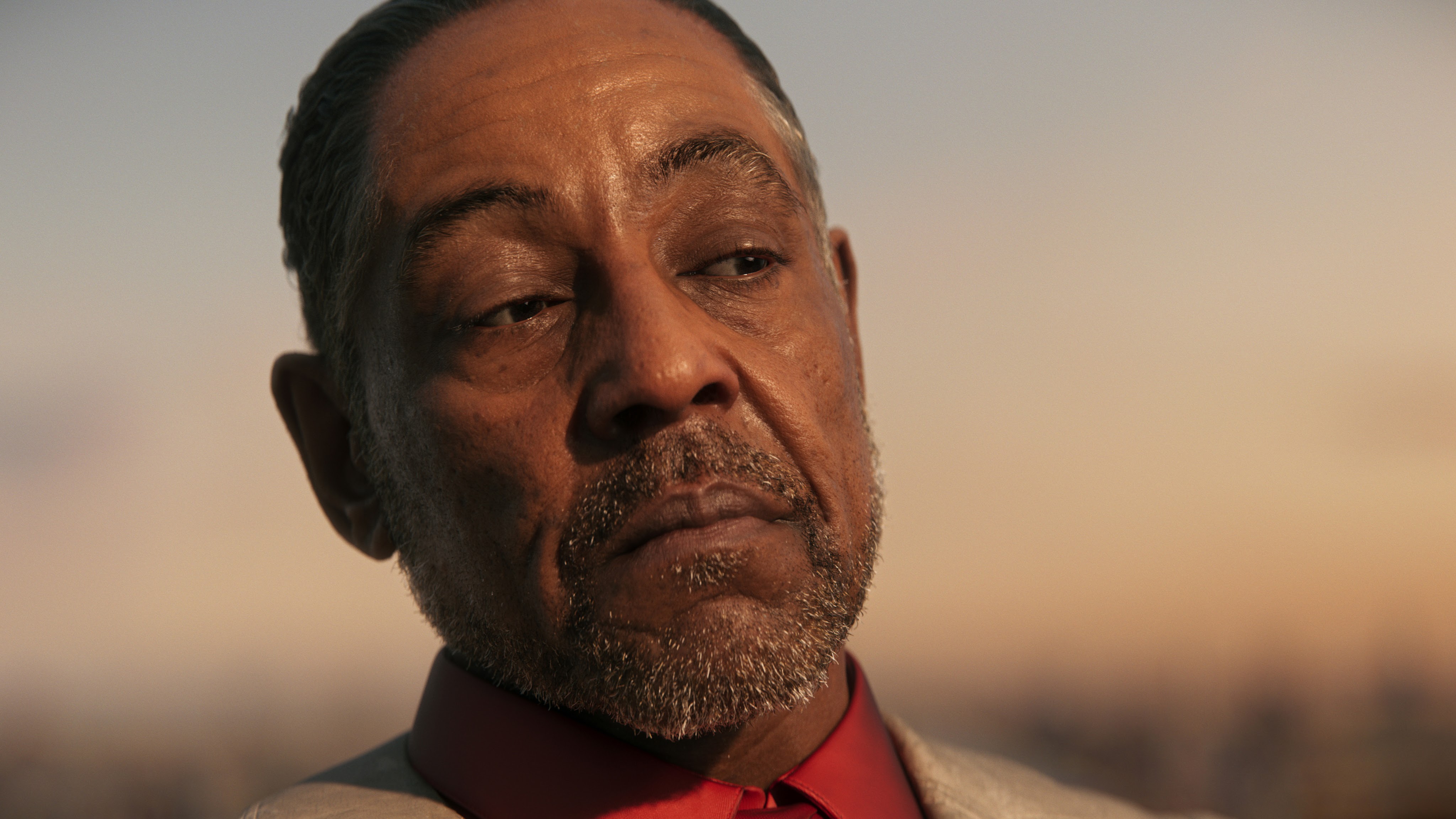 Far Cry's bad guys are always a stand-out and Giancarlo Esposito plays an iconic new character. He is the ultimate dictator, Anton Castillo, who is hell-bent on ruling over his people at all costs.

Castillo's relationship with his son is brutal.

Without spoilers, there's some tough love and life lessons on offer.

Castillo's voice echoes through towns and villages throughout Yara — cementing himself as one of the greatest Far Cry baddies ever.

There's a huge arsenal of weapons at your disposal, machine guns, shotguns, bows and rockets. There are also special weapons labelled resolvers that come with their own unique perks when acquired.

But your ultimate weapon is the Supremo. It's essentially a rocket launcher backpack and is almost guaranteed to take out large groups or heavy enemies in helicopters and tanks. The Supremo takes time to recharge before you can use it again — and rightly so, it's strong.

Weapons and character clothing is very customisable. Every weapon can be modified in one way or another. Attach a suppressor, change the optics, swap around colours or dangle a charm off the side of your rocket launcher — take your pick.

READ MORE: NBA 2K22 is a near perfect basketball simulation 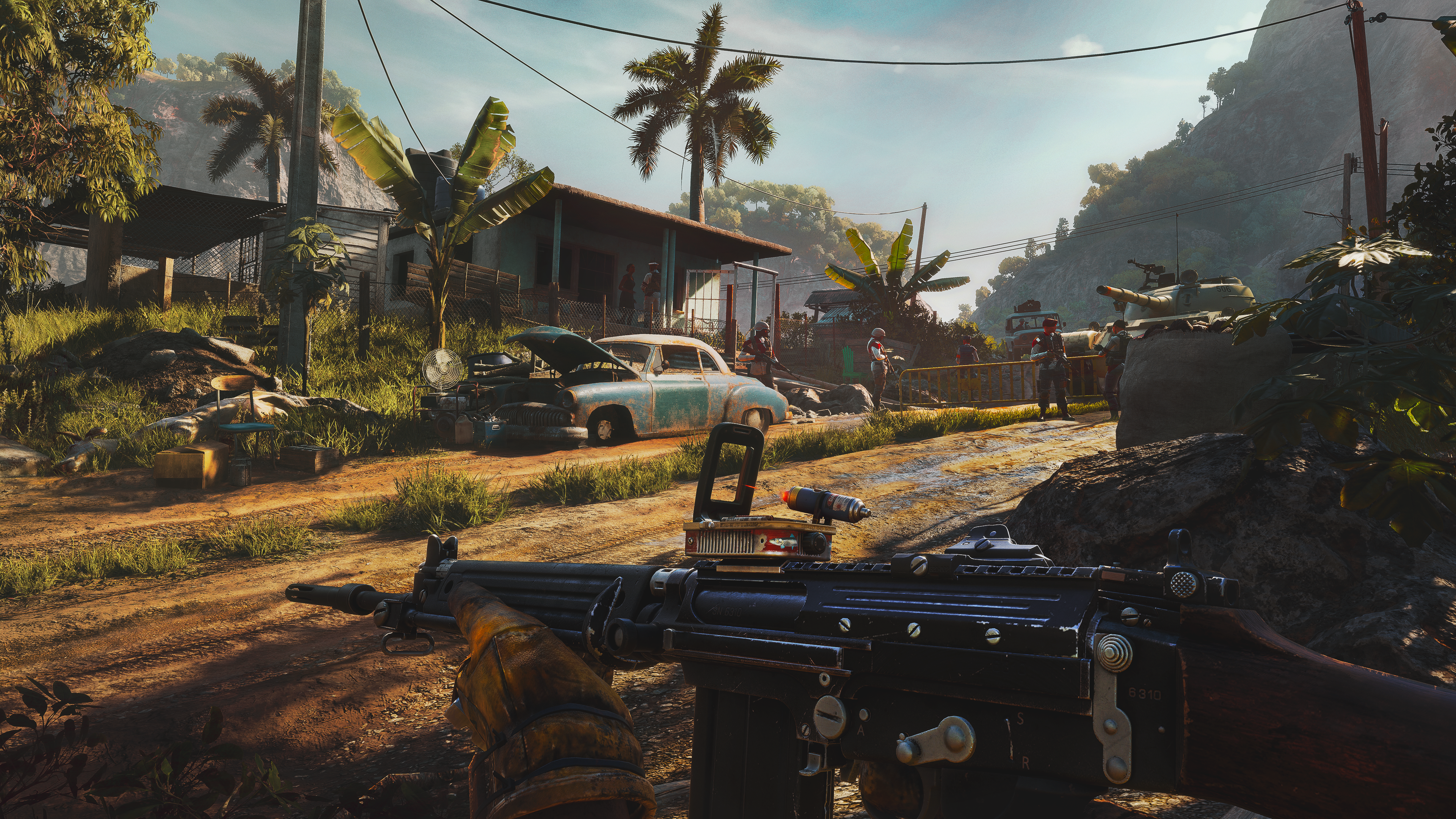 There are no shortage of wardrobe pieces; hats, tops, pants, shoes and gloves can be changed and matching sets can offer helpful perks to the player. Others just look great.

Some missions are often let down by confused AI, while playing co-op it seemed the mission NPC (non-player character) we were told to follow couldn't decide who to track.

Facial animations in cutscenes don't quite hit the mark either, which is unfortunate when you have such a huge star behind the pixels. While it still looks good for today's standards, the expectations were set high. 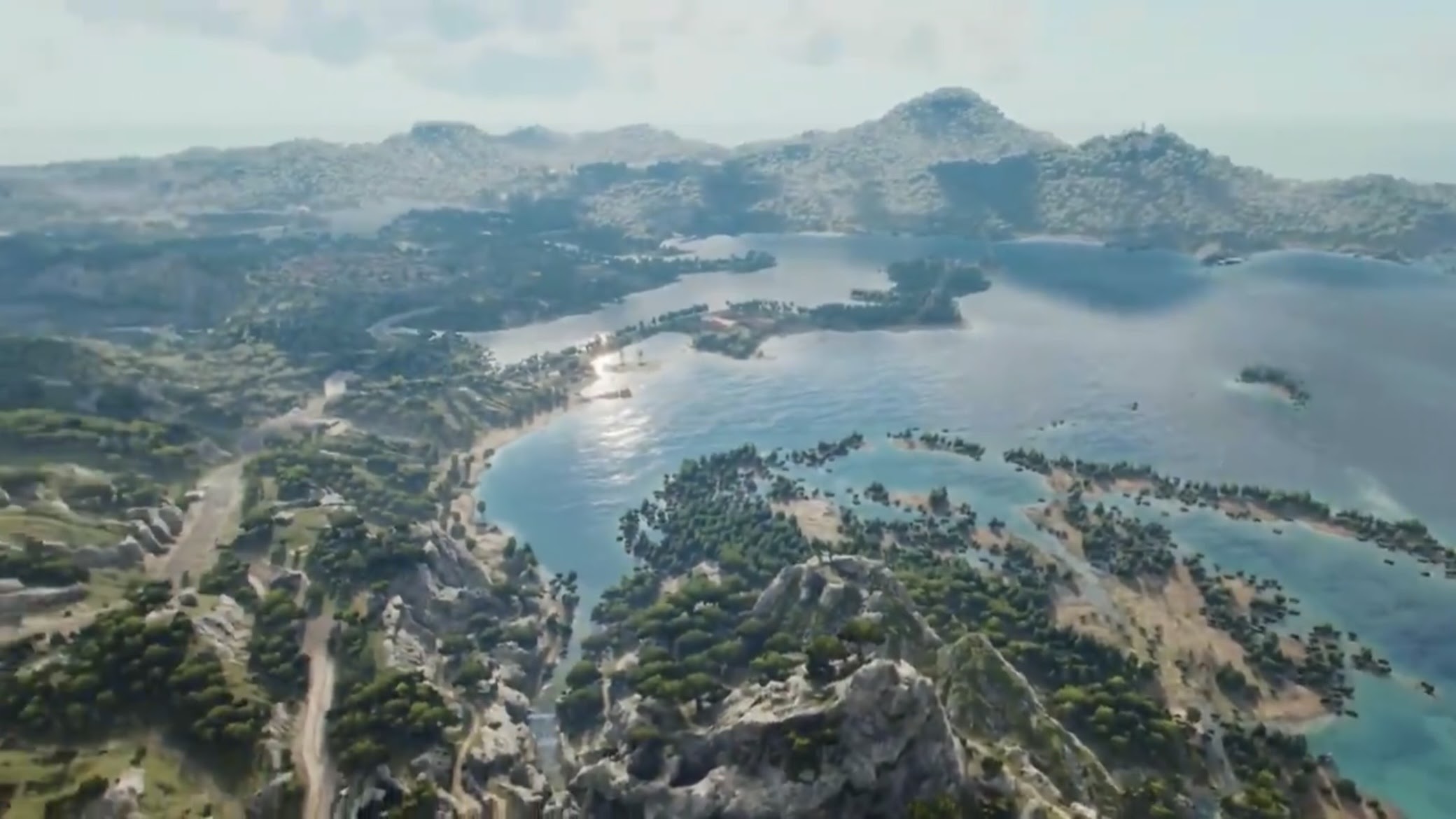 There's plenty to do and see on the island of Yara — the playable area alone is full of detail and incredible in size. Fortunately making your way across the map is a breeze with dozens of cars, boats, bikes and aircraft at your disposal.

The people you save help you build your own resistance. In each of your bases (or hideouts) interacting with the notice board allows you to send your own troops on missions behind-the-scenes. You won't see these missions take place, but you can play a part in deciding how your team of rebels will play it out, as well as choosing from various rewards.

For the first time Far Cry allows you to walk around and see your character in third-person — yet you can only do this while at a base camp.

Character development feels a little rushed at times, the best way to escape this is to fill the gaps with side missions rather than rush ahead with the story.

There are little side missions and opportunities for mayhem around every corner. Save a guerrilla from an army officer — gain a piece of info to help you along your quest.

Cock fighting, inhumane in real life, but in a video game? There are no rules here. In this Mortal Kombat-esque bird fighting mini game you can play as the actual rooster.

Your bird has a variety of moves; long distance, close range, jump and dodge, it also has a special move – it's own Supremo in a way.

What will they think of next?

Speaking of animals, there are a few new amigos that aid you in your missions. From Guapo the croc, to a blood thirsty sausage dog named Chorizo. Each amigo has its own little way of helping out in a fight. 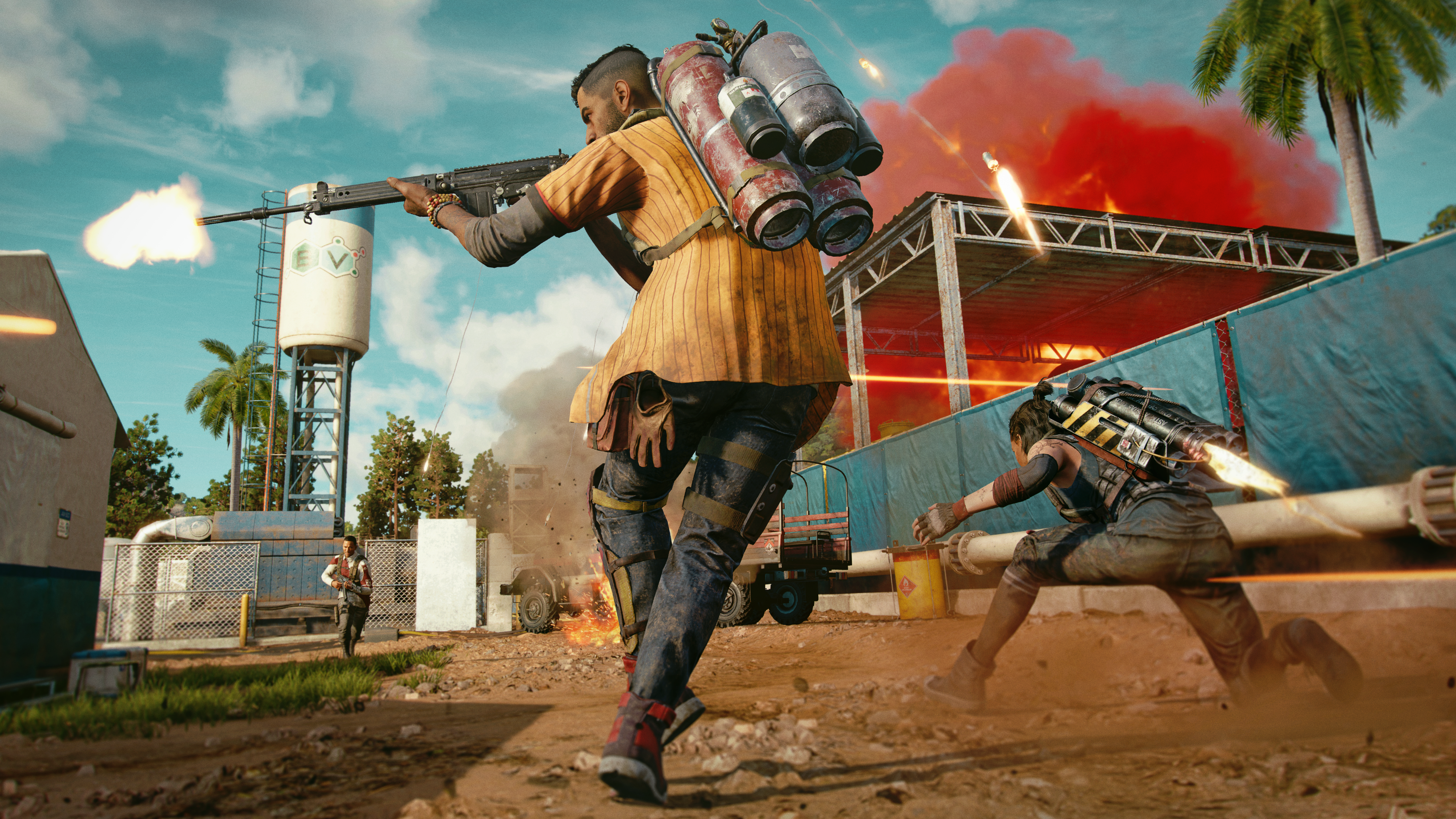 Multiplayer gets a big tick in the fun box, but loses marks when it comes to overall game progression.

Players can team up in Far Cry 6 and complete the entire campaign as a duo, but what happens with story progression on one person's game won't reflect on the other. The only things you'll get to pocket are mission rewards, experience and collectables.

Far Cry 6 is a welcome addition to the series. It wreaks of the past but puts the future of the franchise in check.

If you've played any of the Far Cry games in the past 10 years — you've played Far Cry 6. But that's what makes this game so great.

It's consistent, it looks amazing, it's action-packed, sometimes it makes absolutely no sense, and while it may not claim game of the year, Far Cry has again proven that you don't need a clean slate for success.

Far Cry 6 is out now on PlayStation 4, PlayStation 5, Xbox One, Xbox Series X|S, PC and Stadia.

9News.com.au was given early access to Far Cry 6 for the purposes of this review.