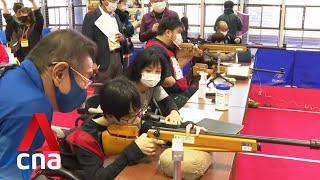 Kumi Yokoyama, a U.S.-based Japanese footballer who publicly came out a transgender man in June, revealed Tuesday on Instagram they married their girlfriend.

The 28-year-old Washington Spirit forward posted photos showing the couple holding a marriage license with a caption that read “I’m sharing personal news today that I’ve registered my marriage in the United States.”

Yokoyama, who according to the team prefers the “they” pronoun, goes on to explain that same-sex marriage is not recognized in Japan, but they want to advocate for the social and legal recognition of same-sex marriages in their homeland through their own relationship.

Yokoyama, who also plays for the national team, came out while making an appearance on former teammate Yuki Nagasato’s YouTube channel and expressed a desire to someday quit soccer and “live as a man,” becoming one of Japan’s most visible LGBTQ athletes.

Japan hunts for its next Paralympians at tryouts in Tokyo

Japan has conducted tryouts to identify its next Paralympians. Organisers hope the Tokyo event will improve the visibility of para-sports in the country, whose track record for integrating people with different abilities lags many of its peers.

The online casino market is flourishing in Japan, and many would put the astonishing success down to the numerous varieties of casino bonus that Japanese-facing casinos offer their patrons.

The Best Up And Coming Japanese Footballers

With players like Daichi Kamada, Takehiro Tomiyasu and Takumi Minamino having impressed amongst the football elite of Europe it’s perhaps fair to say that more players might be heading for some time in the European limelight in the near future.

The northern city of Sapporo intends to review its bid for the Winter Olympics and Paralympics in 2030, looking to reduce costs by up to 90 billion yen ($790 million) or 20 percent of the total, sources familiar with the plan said Saturday.

Ryo Ishikawa said Tuesday he will resign as vice chairman of the Japan Golf Tour Players Association and the Japan Golf Tour Organization following a tabloid report that he broke quarantine rules after arriving home from a trip to the United States.