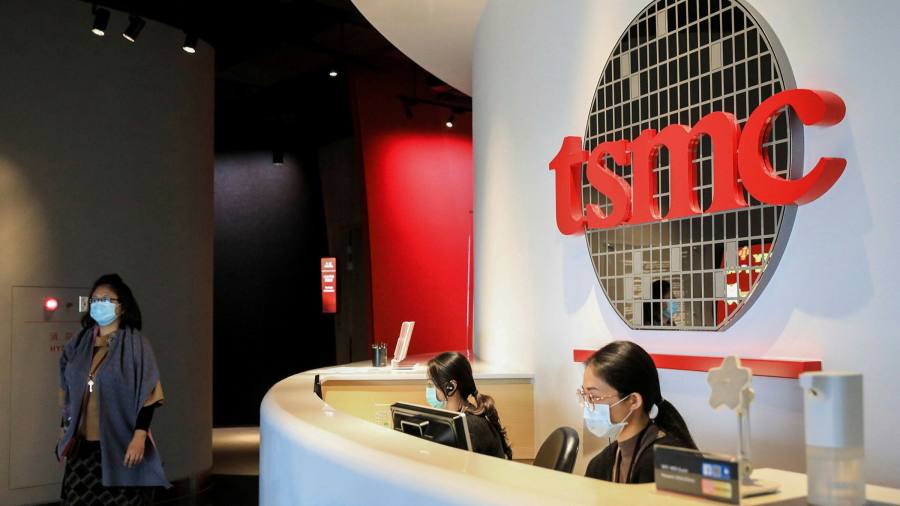 TSMC expects capital expenditure to reach $44bn this year, a 32 per cent increase from the $30bn spent in 2021 and triple the amount in 2019, the company said on Thursday.

The push underscores the outsized role semiconductors are coming to play in goods far beyond classical electronics products, from cars to factory equipment. It also reflects TSMC’s dominance of global chip manufacturing.

The scale of TSMC’s spending will also “put a ceiling” on ambitious plans from Samsung, TSMC’s closest rival in contract chipmaking, and Intel, which has also entered the foundry business, to challenge the Taiwanese company’s leadership, said Dylan Patel of Semianalysis.

“Intel and Samsung are going to have a hard time keeping up with the sheer scale that TSMC is planning for,” Patel said in a research note on Thursday.

TSMC has built a massive fabrication plant, or fab, in southern Taiwan for advanced 3 nanometre chips, a technology level at which production is scheduled to begin later this year. It is also building a new fab for production at 5 nanometres, the most advanced technology level currently in production, in the US.

The company said the expansion was needed because demand for its chips would continue to increase by double-digit margins for years to come, even though some analysts have predicted a slowdown after a growth spurt in the past two years.

“We observe end-market demand may slow down in terms of units, but silicon content is increasing,” said CC Wei, TSMC chief executive. “So even if there’s a slowdown, we believe it could be less volatile for TSMC. So we expect our capacity to remain very tight throughout 2022.”

The company forecast its revenue to grow by at least 25 per cent this year. If TSMC met that target, it would outperform broader contract chipmaking industry growth by at least 5 percentage points and would grow at triple the pace of the wider semiconductor market.

Many analysts have warned that tech demand growth will level off, especially in the smartphone segment that accounts for the lion’s share of TSMC’s revenues.

Kristine Lau, associate at Third Bridge, a technology consultancy said: “2021 was definitely a very high point, even if we look at the past decade.”

“It is [market] share gains, it is pricing, it is unit growth,” TSMC’s Wei said.

TSMC announced a year ago that it believed the chip industry was entering a multiyear period of structurally higher growth rates driven by the proliferation of semiconductors throughout various industries and spheres of human life and the increase of computing density.

These trends, which were reflected in the start of 5G telecom services, the use of artificial intelligence in everything from entertainment to factory automation, and autonomous driving, were boosting demand for TSMC’s chips to such an extent that it needed to build more capacity faster, the company said.

The pandemic added extra momentum by creating unexpected demand for tech gadgets needed for working from home. Together with global manufacturing and logistics disruptions as well as planning misses due to the pandemic, that demand jump led to a persistent chip shortage that has given TSMC even more leverage over the market.

The company has raised prices and required many of its customers to pre-pay to secure capacity, a practice rarely used until last year. It received US$6.7bn in such prepayments in 2021 and expected that amount to increase further this year, said Wendell Huang, chief financial officer.

Driven by the strong demand and full capacity utilisation, TSMC’s gross margin hit 52.7 per cent in the December quarter and was expected to rise above 53 per cent this year, a level that management said could be maintained in the long term.