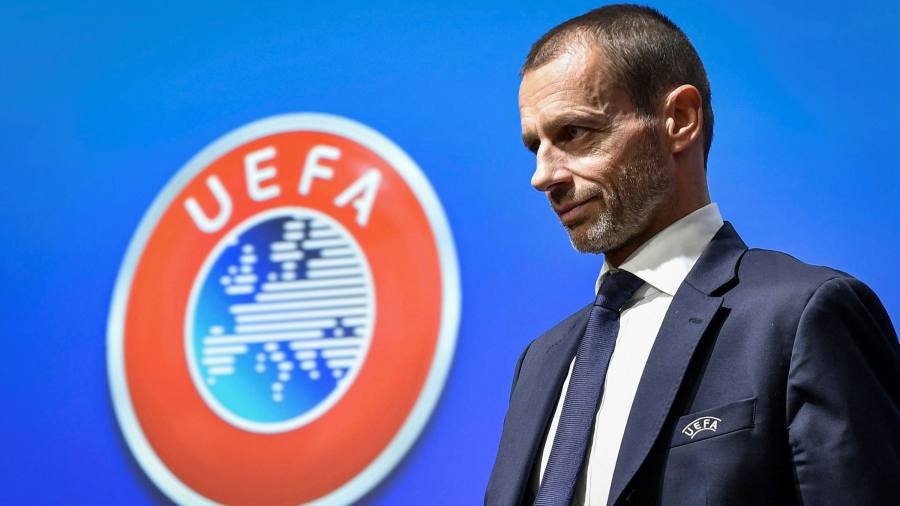 Uefa president Aleksander Ceferin has said it is “impossible” to tell how sport’s boycott of Russia would end, after the footballing body moved to ban Russian clubs from its tournaments and scrap a lucrative sponsorship deal with Gazprom.

Ceferin described the war in Ukraine as “a most terrible situation” and told the Financial Times Business of Football Summit on Thursday that while “it is not about football . . . football is involved”.

But the head of European football’s governing body also suggested that geopolitical matters should not effect where matches are held. “Are people allowed live sports events [in their countries], or do we first check how the political situation is and don’t go to other countries?” Ceferin said.

He was unable to predict what it would take to allow Russia back into the sport. “For now, it stays like that. We are just waiting for peace to come. Football will probably be the least important thing.”

In a separate panel at the summit, Richard Masters, chief executive of the Premier League, said: “One thing that would fix it is if [Vladimir] Putin somehow gets taken out of his role [as Russian president] and replaced with somebody else, that would get everybody to a different place”, adding: “While a war goes on, it’s unsustainable . . . sport and Russia can’t mix.”

He added that the Premier League was reviewing its broadcast agreements in Russia.

Putin’s decision to invade Ukraine has brought renewed scrutiny of the relationships between football and the Russian state. Since the invasion, Uefa has been forced to scrap its €40mn-a-year sponsorship with state energy company Gazprom and work with world governing body Fifa to block Russia from its tournaments.

The war has also forced sports organisers to confront their longstanding insistence that they are politically neutral, while Ceferin said he has been pressing governments to help Uefa support football players trying to leave Ukraine.

Football, the world’s favourite sport, has been at the forefront of cultural pullback from Russia. The Champions League final, the biggest game in European club football, has been moved from St Petersburg to Paris.

Earlier on Thursday, Formula One, the global car racing series, said it had terminated its contract with the promoter of the Russian Grand Prix. The Russian race that was due to take place in September was cancelled last week. A statement from F1 said: “Russia will not have a race in the future.”

The International Olympic Committee has urged sporting bodies to scrap events in Russia or its close ally Belarus. Russian and Belarusian athletes have been banned from competing in the upcoming Paralympic Games in Beijing. Other sports groups have withdrawn or begun to re-evaluate sponsorships from Russian companies.

Ceferin said he had worked around the clock with leagues and governments to help footballers and coaches flee Ukraine. “Nobody could help because nobody could guarantee safety. They said they should stay there.”

“It’s hard for me even to explain how tough, hard and sad those conversations were. One of those players successfully exited Ukraine and came to my home.”

Jonas Baer-Hoffmann, general secretary of players representative body FIFPRO, rejected suggestions that Uefa and Fifa were not political organisations, in discussions about football’s role in the conflict.

“The idea that we can make something apolitical is a myth,” he said in a separate panel. “If Putin decides football is political, it is political.”