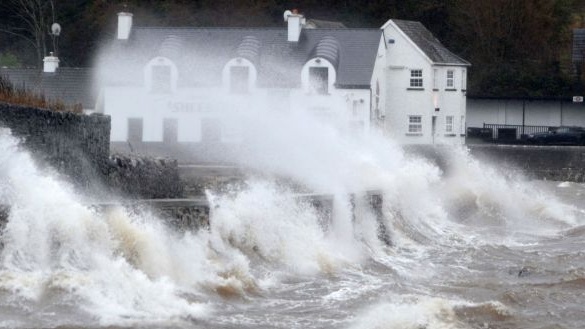 Met Éireann has issued a weather warning for three counties in the northwest to come into effect on Friday, as Storm Arwen is expected to bring gusts of wind of up to 110 km/h.

The status yellow wind warning comes into effect from 3pm on Friday across counties Donegal, Mayo and Sligo.

The national forecaster said winds across the three counties will reach average speeds of between 45-65 km/h from Friday afternoon onwards, with gusts expected to hit between 90-110 km/h.

Met Éireann warned the powerful winds may lead to large waves and overtopping along north facing coasts, particularly during high tide on Friday night. The warning will remain in place until the early hours of Saturday morning.

Storm Arwen has been classed as a storm by the UK Met Office, which has warned it is to bring “a period of very strong winds and cold weather” to Britain over Friday and Saturday. The UK forecaster said the storm would bring “disruption to travel and infrastructure” over the coming days.

Met Éireann has issued a further status yellow marine warning, over gale force winds expected on the Irish Sea and along Irish coastal waters during the storm.

The overall forecast for Friday is for a mix of sunny spells and blustery showers, turning to stronger rain showers and sleet later in the day, with snow possible on some high areas.

Temperatures will range from four to nine degrees, but get colder as the day goes on, Met Éireann said. Friday night is set to be very windy, with temperatures hitting lows of one degree.

Saturday will remain windy following Storm Arwen, but winds are due to become calmer during the course of the day, with some parts of the country to see long bursts of sunshine.

Rain showers will remain in the north of the country and along the west coast. The forecast for Sunday is for a cloudy day with outbreaks of rain, and temperatures between eight and 11 degrees.